Story begins 5 years ago - we discover our dear daughter is terribly prone to being car-sick. I "graduate" to the back seat to be able to give her and myself more space to deal with it.

Fast-forward 3 years - my son enters the picture. Thankfully not much car-sick but my daughter still is, so the back seat becomes a place for children and me.

Fast-forward another 2 years - Damita is 5 and a half, getting better at handling car-sickness and Shehan is quite comfortable standing in the back of the car, but now both children want to ride in front with Appa! So it's usually me in the back with one of them, and the other in the front seat. I begin to wonder when I'll ever get out of this arrangement.

Here's a happy ending to my previous posts on the passport saga - I received my son's passport at last today. The road leading here was a bit bumpy now and again, but restored my faith that atleast in some cases, the process works out!

My last post ended with a visit to the police station, where I was assured that they would also address the error in date of birth that had come up due to their data entry - that was in September. When I didn't hear anything even after the stipulated 75 days I tried lazy methods of finding out the status online - like sending emails to the ids provided - here's how that went:

Following are the steps that actually worked:


This was last Thursday, and after spending the entire day at the Passport office, I was really keeping my fingers crossed, and thankfully that's all it took - Taking the process in our hands, and going right to the source of the problem instead of sitting at home fuming and talking about RTI (which also I did a lot of ;)).
Posted by Aparna at 12:15 AM 2 comments:

1. Literal translations like : "Mookku odaradu illaiya" (Nose is running!) this came out of S a few days back and I just had to laugh for the next 5 minutes! He's still reasonably bi-lingual and speaks both tamil and english though the tamil is getting quite a bit less since he's started school. Thank God for gems like this one - said in a sing-song tone like the way adults usually speak to children in :).

2. Conversation while watching TV and I was switching channels.
S: Don't change! I want "Running Running"!
Me: What is that Shehan?
S: Running Running uncles and aunties - this was referring to the new Docomo ad which is his favourite right now.
Running a close second is the Listerine/Colgate mouthwash ads - he tries to imitate the action of the guy's mouth with mouthwash in it.

3. D is very much into reading her TimeLife books. Suddenly she'll come up to me and say things like "Do you know Preying Mantises eat other insects?" Or "The Cheetah is the fastest animal" and I am just left in awe of the interests children have and the information they retain. I know in a few years when she has to actually "study" this stuff she might not be so interested any more :).

4. One of my earlier posts is about S first started saying "I lie you!". Now he's graduated to "I love you sooo much!" - this is also accompanied by a wonderfully plaintive tone of voice which can get him out of most tough situations :). I was so touched the first few times he said it to me only to be brought down to earth when he addressed a roadside dog when we were driving in the car and said "I love you soo much doggie!".

5. D telling me stuff like "Amma you look sooo nice" even at times when I know it's not very true and I just have to smile. I've lately been very upset by my hair falling, so she comes up with stuff like "Your hair is so long and nice ma, why do you feel bad about it!" :).
Posted by Aparna at 8:45 AM 2 comments:


I am not a vacation planner by nature - we decided to take a Club Mahindra membership a few years back - and this forces us to use up those vacation days once or twice a year or else they could just lapse - always better to have "I have paid money for this!" looming over your head to make good use of something :). 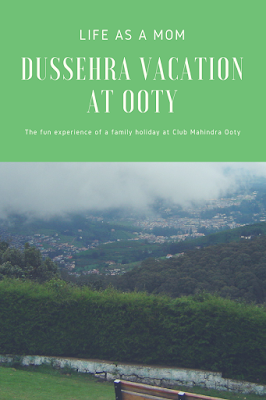 So this time our Dussehra vacation was to Ooty which is a popular hill station in Tamilnadu. Coming from a "non-vacation" family myself (We visited relatives during vacations as my dad was in the Railways and usually living away from the south), I was one of not so many South Indians who have never been to Ooty so I was really looking forward to this. I called ahead to check about the rooms, the weather (yes I have got better at this stuff with every vacation ;) ) and was told it was cold and raining most evenings. "Sounds like Bangalore" I said nonchalantly and took jackets and woollens for the children but decided just shawls would do for myself.

But Brrrrr - the first night caught me by surprize, the chill that the rain brought with it just completely floored me. To go to my parent's room which was 10 ft away I became a shivering mess! Maybe it was the tiredness of the journey combined with the weather, but I am definitely wiser about underestimating the weather anywhere now! And of course a learning for all parents - don't forget yourselves by just focussing on the children - you have to be in the best of health first in order to look after them well !

Okay this post is getting longer and longer so let me just give a recap of each day:

29th Oct (Friday) - We drove down from Bangalore. Left home in the morning by 7:30am and reached Derby Green, Ooty at 4 pm. Relaxed for a while and children played in the park right next to our rooms. Before we knew it, the rain came (refer above!) and just going to the restaurant which was 100 m away from the rooms for dinner was quite an ordeal.

30th Oct (Saturday) - This was designated the main sightseeing day. The resort arranged a car for us and we went to 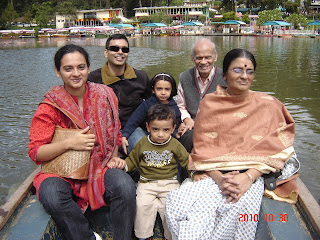 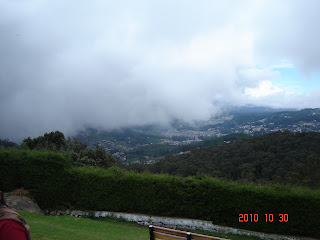 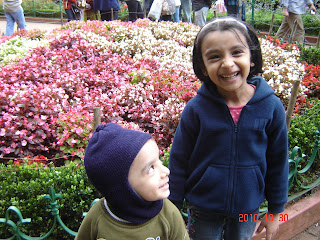 31st Oct (Sunday) - We wanted to take the train (popularly called the Toy Train) to Connoor which left Ooty by 9:15am. Unfortunately we didn't anticipate the crowd as well as some last minute holdups with getting into the station and so didn't make it. Instead took the car to Connoor where we visited some family friends. They live in a quaint and wonderful house surrounded by plants and plonk in the middle of a tea estate. For the first time I saw and touched and smelt plants like Lavender and Elderberries and so on which I earlier had only virtual exposure to on Farmville!! I know it's a joke to compare the virtual game of growing these crops in a few hours to tending them in reality - the friends we visited had been working on this land for the last 7 years and boy it showed!! Once again by the time we left here it was raining so we suspended any sightseeing plans in Connoor and got back to Ooty and the resort to our heater warmed rooms! 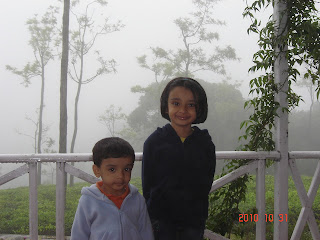 Okay there's no hope of keeping this short so no more apologies on this! We spent both evenings in the warmth of our rooms or playing with the children in the Activity room of the resort as we didn't want to expose the kids or my parents who spent the vacation with us to the chill of the evening weather. Left early on Monday (1st Nov) and got back to Bangalore by 3 pm or so after extended stops for breakfast, lunch as well as shopping at our standard handicrafts shop in Channapatna (near Indradhanush restaurant).
Posted by Aparna at 3:43 AM 2 comments: