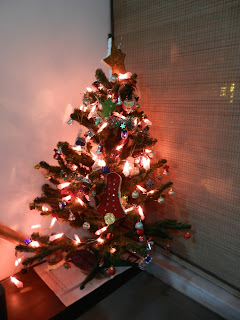 Christmas is nearly here ! Like every year, we will be in Chennai for Christmas and before we leave our tree is all set up :). This year most of the decoration was done by D and S and a friend of D's who had come to play and this was the most interesting game I could think up! The lights are from The Hundred Hands collective that I had been to last month.


My co-sister makes the most amazing Christmas Fruit cakes, and for the last couple of years I have been wanting to try it out. But everytime I thought of the list of things to get ready for it I just couldn't bring up the enthusiasm and kept putting it off. This year though, I have generally been on a baking high, and thanks to some FB groups like Foodies in Bangalore, could also get information on where to find various items. So after looking up zillions of recipes and settling on the most approachable two from Archana's Kitchen and Kerala Plum Cake and lots of Q&A sessions with Anu chechi (Thanks a ton!!) Tadaaaaaaah !! 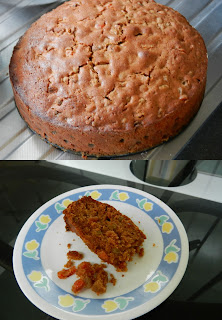 Here's the final recipe I used which has aspects from both the above, and the fundaas I used for my changes in italics :). I baked a second one so that I could tweak it a little bit more so what you're seeing is my second and hopefully better version!


The original recipes call for a lot more types of dried fruits, but both for trying to simplify, and a laziness of trying to find everything I decided to stick with raisins and cherries. Eliminated the nuts as noone at home likes nutty cakes much. :).


Step 0: You can buy the candied peel if you know a good source. I didn't find it in time so made my own :). Heaved a big sigh of relief that my homemade peel added no touch of bitterness to the cake.
Made a second cake and this time my peel was totally soooper :). The secret is to boil it in water and rinse it out a couple of times before simmering it in a sugar water solution, so the bitterness gets washed out.

Step 1: Chop up the raisins and cherries(make sure these are de-seeded) so they are all about the same size - I made the cherries about 1/8th each - the premise is that you should be able to cut up the cake without large sized fruit pieces getting in the way :). Pour in the brandy and leave to soak for a couple of days. Also pour in the orange juice into this mixture at the same time or a little later.
The second time I made it, I reduced the brandy(from 150 to 100ml) and added caramel made from 1/4 cup sugar(how to is in Step 4) as this is supposed to take out the "brandy" taste a bit.

This can be just an overnight soak, but since I heard that the tradition is to leave it for a month (!) I thought I would add an extra day atleast :). This needs to be mixed up once in a while otherwise the top layer may become dry and only the bottom part get soaked in the liquid.

Step 3: Sieve the flour along with the baking powder, salt, spice mix and keep aside.

Step 4: To make caramel out of the sugar, heat in a thick bottomed vessel until it starts turning a nice brown colour. Then keep shaking vessel(no spoon) to stir it around a bit until the colour becomes a nice daaark brown. Take off the heat, and start adding water(equal amount as the sugar) a little at a time, putting back on heat to mix up the water and make the final caramel sauce/liquid. This is what gives the dark brown rich colour to the cake, especially in case your brown or demerara sugar is not so dark. Leave it to cool before mixing into batter.


Step 5: Cream the butter and sugar together, and then add the eggs one by one, mixing well after each.
One recipe called for 5 eggs, another for 2. I have a fear of cakes becoming too "eggy" so I settled for 3 and this worked out pretty ok.

Step 6: Add the flour mix little at a time and mix well.

Step 7: Filter the soaked dry fruits, add 2-3 table-spoons of flour and mix it up with this. This step is important so that the fruits don't settle down to the bottom of the cake (I was so thrilled that this worked as expected :) !).

Step 8: Stir the dry fruits into the flour mixture until mixed well.

Step 9: Pour into pan and bake for about 1 hr 10 minutes. Insert a toothpick into the centre to check. Leave to cool and then cut.

Optional Step 10: The cake can also be periodically soaked with more brandy to increase the "richness" hic :) ! For the record I am not doing this, atleast unless I find it's gone dry within a couple of days ;).


I found that this cake does taste better with time, as suggested by the veterans. Initially I felt the raisins tasted a bit "brandied" but this sort of settled down and probably got absorbed by other parts of the cake, and I am liking it much better after 2 days!
Posted by Aparna at 7:26 AM 3 comments:

My last couple of baking attempts ended a bit sadly - one was an apple cinnamon cake, and another was an orange chiffon cake - the flavouring was decent but somehow didn't taste quite "right" both times :(.

So this time I set out to make an old favourite - the brownie, but decided to try a new recipe that uses olive oil - these were Double Fudge Olive Oil Brownies :). Well I pretty much went according to the recipe in the link, wasn't sure whether to powder the sugar so left it as is (I will always take the lazy option ;)). Though they turned out on the sweeeet side, I don't mind that so much as the size of a portion is small enough for the sweetness to not be overwhelming. 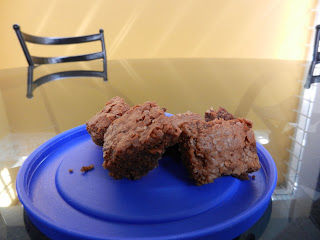 There's my lovely orange wall in the background - looking much less orange here though don't know why. And the more food photography I see online, the more I realize how bad I am at it, but anyway just to give an idea of what they looked like, and a reminder for me cos they're gone already!!

I am finding more and more that the ingredients to be used for most baking recipes (except for the standard sponge cake, chocolate cake type) are not always easily available in all stores and trying to substitute doesn't always work well. So just in case anyone is interested in trying this recipe, I thought I should mention that I used the Selbourne/Chuckles Choco slab available at most Nilgiris Outlets and also choco chips from the same company. The Olive Oil that I used is what I use for much of my cooking which is Leonardo Olive Pomace Oil.

Added note: As I am posting this daaays after actually writing it, I have since also found the Morde chocolate slab which is available in many places like MK Ahmed stores.

My next attempt will be a Christmas Plum cake which I'm trying for the first time, so wish me luck :) !

Another note: I have already finished this, and Yay it came out ok, recipe coming soon.

Just when you begin thinking of yourself as an "experienced" parent, you are reminded that there are many things left to learn :). Some learnings while raising S:

Turning over at night to find something poking into your side - could be anything from a car to a drumstick :) .. a big change from teddy bears or dolls !

I have learnt from his observation that car wheel caps also have the symbol of the company - as my 3.5 year old points out immediately that the Swift parked near home has one wheel with a Toyota symbol on it which is "not correct"!!

After wondering at 5 years if D was old enough to have her own bath, S now wants to start having his bath at less than 4 years old :) - thanks to the example set by his sister of course! I know it's not going to really accomplish any cleaning but WTH it's worth it to just see him try to reach his back ;).

That in Calvin style the toilet might be flushed while still sitting on it (thankfully not inside the closet and having a bath in it yet ;)!)

And though I was keeping my fingers crossed for his school Parents Day this year after last year's experience, he completely surprized us all by remembering and performing all the steps for "Nanna Re" :).
Posted by Aparna at 1:24 AM 2 comments: