The holiday continues after our day 5 at Kumbalgarh:
Day 6: We had planned a day trip to Udaipur which was about 100 kilometers away. We left the resort early and also enjoyed a local breakfast of samosas, methi pakodas and faafda before reaching the city of lakes. Our driver, Devendra, belonged to the city and was raring to show us around his hometown. First stop was the Karni Mata temple that you can reach by cable car (or by walk) and provides a bird-eye view of the city and Lake Pichola. The temple also houses some white mice that are considered sacred here.

The next stop was the City Palace, but we headed here only after a photo session in the local Rajasthani Garb near Lake Pichola (once again on our driver's recommendation). We realized later that this is an activity that is quite popular here as every tourist spot had a stall set up for this :). 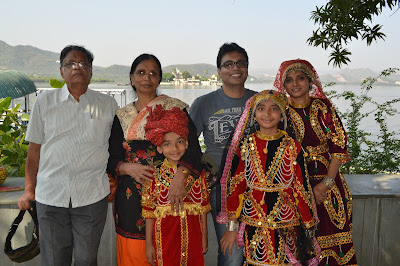 Caution Rant ahead..
At the City Palace, we were a bit taken aback by the camera fee being equal to the entry fee :P. It was also a bit of an irritation that the security was at an all-time high and one of us had to leave the camera behind (we were not planning to use it as we took just one camera ticket). I guess honesty cannot be gauged by our faces, so I'm ok with our camera getting kept back but it just didn't seem to make sense in this age of technology where literally everyone can click with their phones anyway. On that day, the place was inundated by groups of schoolchildren who were doing just that when unnoticed by the guards.
..Rant over

Well, I made the best of the camera fee and clicked a pic of EVERYTHING, don't worry I won't share it all here ;). On the whole, the place was kept very clean in spite of the crowds so it was a nice experience looking around.
One of the displays was the collect of silver - this included items like a present of silver hairbrushes and other grooming implements, as well as many lovely photo frames made of silver. The idol of Chetak was also decorated with tons of silver.. looked at this very keenly as I have a bit of a silver jewelry fixation ;).


After lunch at a nearby restaurant, we headed to the statue of Maharana Pratap and Chetak, where we couldn't stand around too long due to the heat being quite high at that time of day. We soon took refuge in a small museum type display of paintings and models depicting the history of the state.

After a quick stop at the lovely fountain and gardens at Saheliyon ki baadi, we were quite tired, and after a spot of shopping we headed back to Kumbalgarh for the night.

Day 7: This was a day of rest, to recuperate from the hectic sightseeing of the day before and also because of there not being much to see at Kumbalgarh other than the fort. We did manage a short visit to a nearby lake, where again the profusion of catfish was amazing as fishing is not allowed and tourists feeding the fish with puffed rice and other treats is a small source of income to the locals.
We went back to the fort in the evening, where we thoroughly enjoyed the Sound and Light Show - it was an amazing way to hear of the history of the fort and the state. A beautiful experience to round off our holiday :) 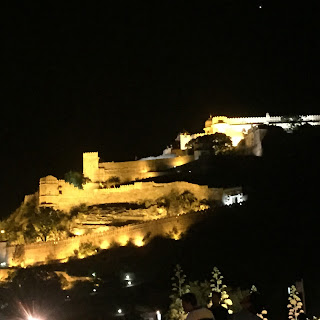 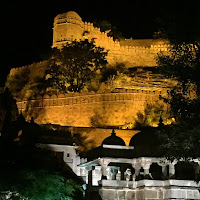 All those of you who read Part I and asked for the continuation.. thank you and here goes :)


Day 4: As Jodhpur was enroute to Kumbalgarh from Jaisalmer, I had decided to stop there for a few hours and try to catch the main attractions. The highly recommended one was the Mehrangarh Fort and we managed to get here quite bright and early. It was a different experience from Jaisalmer, as it is a very tourist friendly fort - the only mixup being that as it was the start of Navratri we ended up getting into these male/female queues (all the while wondering what was going on) and then had to backtrack to get to the actual museum/entrance. On the way out, we somehow managed to walk down past the entrance and then had to trudge back uphill to get out :P - a lot more cardio than I had intended.

Next stop was the Umaid Bhawan palace where we were charmed by the grace of the personnel who act as guides. This photo was directed by the gentleman who was taking us around - he made me click multiple times with moving G and the kids until he was satisfied :). 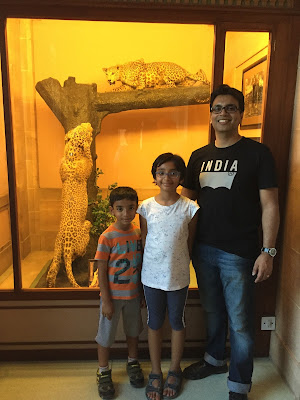 There was also this lovely set of paintings/murals with scenes from the Ramayana but interpreted in a Greek style as that was the nationality of the artist (as told by our guide, have not substantiated it with Google ;)).

We spent the rest of our time in Jodhpur checking out(for rather too long ;)) the local Bandhani and Lehariya work at a Handicraft emporium before finally making our way to Kumbalgarh. The roads to get there passed through some ghat areas and for kids who used to be badly car sick in their early years, both D and S were troopers and we reached there without much ado. Much thanks to G who sat in the back seat and gave them someone to hold on to, instead of me being there and getting a bit green myself!

Day 5: The main and nearly only attraction in Kumbalgarh is the Fort and it has quite a history behind it. From Umaid Singh who was saved by Panna Dhai and brought there to safety, to Maharana Pratap in later years, it has played a major role in the history of Rajasthan. It was also one of the most fascinating forts to explore, simply because it is not as crowded and we could just meander here and there trying to look at things. We went to the fort in the daytime, so it was decided (as recommended by our driver) to do the Sound and Light show on another day.

Please bear with me.. this is getting longer and longer so going to end with a Part III :).
Posted by Aparna at 9:21 AM 4 comments:

A Royal Holiday.. and a blog milestone :)

Just as I was about to publish this blog, I noticed that the blog has passed 100K views!!!!  Yayayayayayay and thank you all :)

This holiday's been in the making for a couple of years now. In 2013, I started browsing Club Mahindra resorts in Rajasthan with an idea of going there but suddenly noticed the one at Dubai and ended up just like that booking that instead :P. (Link to that holiday) That resort was definitely a good find, and I have been recommending it to anyone who has a Club M membership.

One week was the time we had for this holiday, so I decided to stick with 2 out of the 3 Club M resorts in the state. Jaisalmer is the toughest to get to as it's 300 km away from the nearest airport at Jodhpur, but there was no way I was leaving it out. For someone who studied in the state (at Pilani) for 4 years, I had seen woefully little of it, and the vision of untouched sands had always been a dream. Since a lot of road travel was involved, we decided to go with a fixed car and driver for the entire trip, from getting picked up at Jodhpur airport to getting dropped back there at the end of the week. We were lucky to get an enthusiastic Rajasthani local from Udaipur as our driver - he helped set our daily itinerary and also told us lot of local tales along the drive.

Day 1: After a long day of travel (morning flight, afternoon another 300 km by car), we arrived on Saturday(10th night) at Jaisalmer.

Day 2: Though the fort was one of the main attractions, our driver suggested we leave it for the next day while covering everything else on our first proper day of sightseeing in the city. We started with a nice boat ride on the man-made Gadisar lake - there was quite a lot of water in the lake with a lot of fish (the catfish variety) being fed at places. The fish here thrive due to fishing not being allowed.

Next stop was the Patwaon ki Haveli, which is a well maintained abode-turned-museum. It contained a lot of intricate carving work in wood and the golden stone of the region, and also some rooms set up in the style of the time.


One of the stories our driver Devendra told us was about a "legend" of the area - the abandoned village of Kuldhara. Though TripAdvisor reviews had warned me that this was more hype than anything else, I thought it was worth it to get carried away by the enthusiasm of the moment so decided to check it out anyway. The story goes that the entire place consisting of 5000 families from many villages in the area just upped and left in one night, all to protect a 10-11 year old girl, the "daughter" of the village from being carried off by an invading ruler.

Our day wasn't over yet, it was only about 3:30 pm when we left Kuldhara and off we headed to our Desert Safari. I was hoping to avoid the camel ride (for both our sakes) but somehow it was meant to be and it was on camel-back that we reached the beautiful sands to view the sunset. We got back to the desert camp for a cultural show and dinner before heading back to the resort.


Day 3: We had some warnings from our driver that the Golden Fort was not the cleanest as it was a "living" or lived-in fort. Even then, we were a bit surprised by the condition inside, especially in narrow spaces where the pigeon droppings overwhelmed our olfactory senses. With all that in the background, it is still difficult to not be impressed by the history and architecture all around. The history and spirit of Rajasthan really lies in its forts, as we were just beginning to discover.

I can see that this is beginning to get not just long, but also very photo heavy. So I'll stop here, and put the remaining stories/pics in Part 2 :). Thanks for reading!
Posted by Aparna at 8:19 PM 12 comments: