And it's that time of the year again! When you have to scratch your head (or break it?) thinking of things for the children to do to keep them away from the TV. I'm such a un-craftsy person I always find it tough to figure out this stuff. So for the first time I am trying to apply my mind and think of things simple enough for them (and me :)) to sit and do together.

D made it easier by bringing back her pottery clay from school, so she made a beginning by making this flower, and adding the flower pot and surprizing me with her creativity! 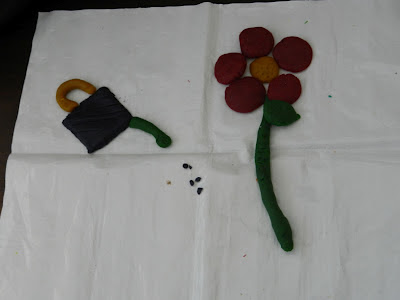 And then there's that paper folding technique that I have hardly ever tried my hands at - Origami ! Such amazing stuff to be made by just folding paper, and I found that I had to resort to youtube videos (!) to understand the simplest fish base too! Decoration of course is courtesy D :). 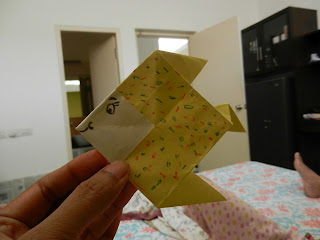 I was just reading through some of my old posts and realized I re-started this blog when S was 2 and a half years old !! Patting myself on the back that I've managed to stick to it this long atleast, though of course have been meandering along the way to now posting very varied content ;). It also made me think that the blog has evolved from capturing the journey of my children to include my own transition too! From seeing myself as primarily a mom, to now mommyhood being one of my primary pursuits :). 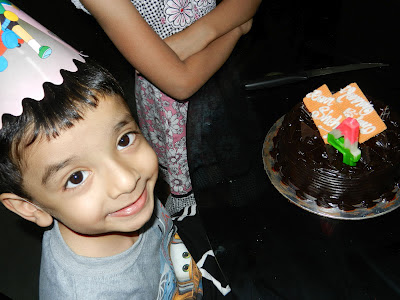 I have been wanting to take more photos of the children.. maybe I need to start one of those 365 days - a photo a day kind of challenges :). Even if I accomplish one photo a week I will be pretty thrilled, let me start with that atleast! So here goes to one photo of each child (or both together as a shortcut ;)) and one related blog post a week.

S turned 4 last Saturday. It was without much fanfare, as I did not have the enthusiasm to invite a lot of children just for the sake of it, so we did a very small homely affair with a small chocolate cake and only us to dive into it ;). Loved the creativity of writing the wish on the wafers as the cake had too much decoration to fit in the wording. 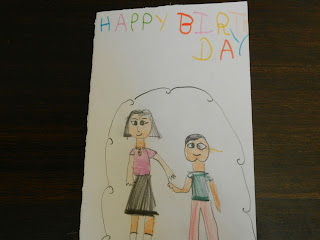 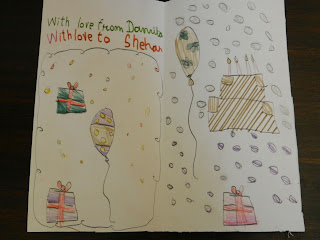 Big sis made a lovely card for him, and she was rightfully proud of her "gift" :).

7th March was World Read Aloud Day - don't you just love the sound of that name? When Pratham Books announced this a few weeks back and asked for Champions to conduct reading sessions all over India, I immediately volunteered. After all reading is one of my favourite activities, and one I try hard to inculcate in my children. So reading aloud to a group of children seemed like my cup of tea :).

I later realized that it was a weekday, so it would be a bit of a task to try to gather children together in the evening, what with all being busy with their hobby classes and their homework. So I went along and asked Neetha Harish who's the Director of Siksha Montessori House of Children that S goes to, if I could do the reading session at their school. She is always open to interesting activities, and also a fan of Pratham Books, so she immediately agreed too and I was all set :).

I received this lovely book called Yakity Yak a few days before the big day, and spent time going over it a couple of times trying to figure out how to make it more interesting for children to listen to. The book is all about a little Yak who (you might have guessed it!) talks a lot and makes a lot of friends because of it :)!

On 7th morning, I landed up bright and early at Siksha, and immediately got into reading to the first group of about 20 children. Now this was my learning group, as I realized that reading the story verbatim was not enough to engage the attention of children as young as 3 years old. With some sound effects (Whoo Whoo Whooooosh!) and showing the pictures while I was narrating, they seemed to understand the story, and asked questions and responded to discussions along the way. 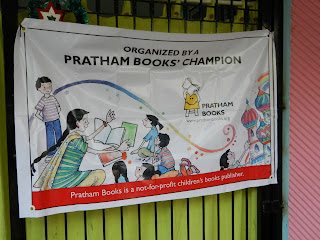 I read to 4 groups of children over the morning, totally about 80-90 children I think, and I like to think I did a bit better with each passing group ;). As they also had Holi celebration in school the same day, we didn't have time to get into any follow-up activity to the story. But I left the book with them, and Neetha will try to have some art/drawing sessions based on the story within the next few days. I will scan and add the results to this post soon :). Below are some photos of the children, one of them taken later as I missed it out on the same day. 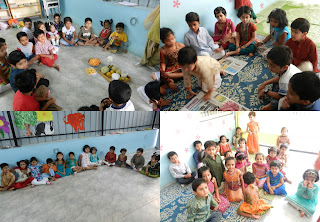 For me, it was a wonderful experience, and a learning one definitely as I have never before tried to engage the attention of a varied large group of children. Kudos to the teachers who manage to do this every day of their teaching careers, and in my personal experience the teachers at Siksha excel at it! Thanks to Pratham Books for coming up with this wonderful initiative to introduce more children to the world of books and reading, and may they carry on with publishing many more such interesting and engaging stories for children of all ages.
Posted by Aparna at 1:47 AM 4 comments:

It was too much of a coincidence that I had this blog post in the works, and received a blog from Indiblogger about the Stayfree Time to Change contest. They ask "If you could change something around you, what would it be?". So here goes:

I have been composting my kitchen waste for a few months now, but there was something still bothering me - the amount of waste that went into my garbage bin and therefore into a landfill was still too much, and there were too many plastics in it which I knew would not be removed along the way.

It is no use to keep lamenting that the "government" or the "authorities" don't do anything about it. This is something that can only work if it is got into at the grass root level of each household segregating their own waste and disposing it effectively so as to move to a zero waste model as much as possible. In fact there is a lot of support provided by different organizations that we don't know about just because we don't bother to find out about it!

First step - I got a lot of information from some experienced folks like Vani Murthy who's an active member of the Solid Waste Management Round Table or SWMRT and very vocal in spreading the word about this cause. Their page also has a Directory of Recyclers which gives the contact persons in various organizations who would collect your dry waste. The first in the list was Samarthanam which is an NGO known to me and quite close to where I live, so I thought I must start out with them. When I spoke to the contact person, he mentioned that they even come and collect dry waste from my area, but I decided to drop it off myself to try and understand better about how the system works.

Next step - Figuring out how to prepare the dry waste. Now this is still a learning process for me, but listing out the ones I'm doing right now:


The key of course is "dry" waste :). I have dropped off one batch already, and hope to continue to do so every monday from now on!

The whole journey starting from composting to kitchen gardening to now trying to move towards zero waste has opened my eyes to the possibilities of empowering oneself if only we are willing to look around and find the wealth of information out there. And though I have never considered myself a typical green warrior but have come to believe that doing our little bit towards improving our environment can go a long way if all our little bits come together for the greater good :). And do I have to add we would be leaving a legacy behind for our children too, not just a better environment but the example we set to them about how to contribute in our own way! 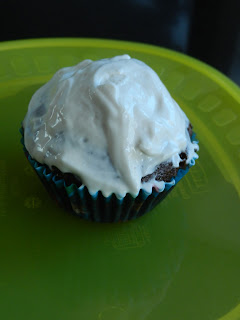 Beginning of story: I saw some recipe online that needed fresh cream/whipped cream and for the next few days kept looking out for it, but didn't find it weirdly enough. Then I finally saw a pack of Amul Fresh Cream and bought it, but had no clue what it was I had wanted to make :) ! What fun, it was time to look around and see what I could make. So the first attempt was a 100% whole-wheat chocolate cupcake, and the cream went into making a topping for it. Obviously I just slathered on the topping, it doesn't look pretty, but it was a nice combination! Recipe from here for the cupcake. The topping was just whipped cream, sugar and vanilla essence - I used 3 tbsp sugar to 1 cup of cream, and 1/2 tsp essence. 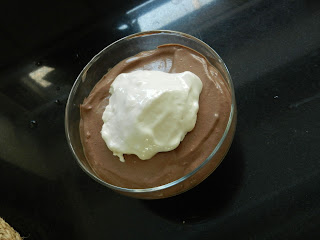 So I still have most of the pack of fresh cream still left over and wanted to finish it off within 4 days (that's as long as you are supposed to keep it after opening the pack). So with some help and suggestions from my Foodies group on Facebook, I finally settled on a Chocolate Mousse. Slight problem, the idea of having uncooked egg was not too appealing to me, so went for an eggless recipe which came out pretty decent too. And it's finished with a dollop of the leftover cupcake topping of course ;). Recipe is here. 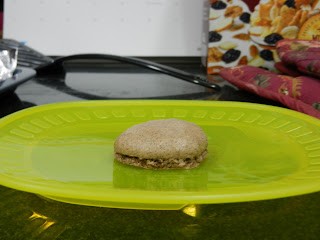 And now to my grand finale - the Macaron ! For making these out of the blue, had the small excuse of the leftover topping still remaining, but actually just been wanting to make them for a long time now, and I saw this very approachable looking recipe and jumped at it. So the recipe is here and it's really as simple as it looks, except that you can't do the piping part without the equipment of course. I just plonked spoonfuls of the batter onto the tray, which of course gave me different sized, differently done macaroons but still for a first attempt at what I thought was a super difficult item, it went off quite well :). Didn't even feel like sandwiching them finally as they are just so crunchy and lovely on their own.
Posted by Aparna at 8:45 PM 8 comments: