To Push or Not to Push?

This is not a childbirth story, though the title would be appropriate for that as well ;).

As parents in current times, we are very aware about the impacts of stress on our kids, and sometimes this does mean that they get an easy out. I find it tough to decide when to push a bit and when to let go, and I say this as a very easygoing parent on the whole. I'm ok with some opportunities being lost, in trying to make sure that the kids are mentally prepared for anything they get into. On the other hand, as an adult, I know that we cannot always choose our challenges, and I would like my kids to be somewhat prepared for the realistic world they will grow up in.

While studying or practising (at exam time) is something that is a non-negotiable activity in our home, most other things are left to the kids to decide. This is especially true of "additional" exams that I have hardly ever enrolled them in, as they haven't shown much interest in that direction in spite of most of their peers doing it. I look at it as one more exam that I would have to push them for, and that usually makes my decision for me ;).

When there was an athletics event coming up this month, my 9 year old was very keen (he's been interested in running/athletics for a while as I mentioned earlier on this post), while my 12 year old .. not so much. I enrolled him, and tried to persuade her a bit to enrol as well, but then just let it be as I thought participating in something like this should be voluntary. They've both been going for classes/training for a few months now, so being physically prepared was not the concern here.

Forward to the day before the event, and the coach messaged me to ask if she could substitute as one of the girls of the relay team in her age category had dropped out. She was quite aghast to begin with and there might have been some tears along the way but she finally was persuaded to go, to help the team out. Or rather she might have realized that I wouldn't take no for an answer ;).

I kept feeling a bit guilty about it, and finally got teary eyed when I saw her running, but she did a really good job of it. She managed to keep up the pace well and even caught up a bit to a runner ahead of her, and the team finally won 2nd place and the silver medal. D was very happy with the silver medal and glad that she had been pushed into it, though I'm still waiting for that thank you note. I am totally taking credit for that medal of course ;).

Side-note: As someone who has been trying to get into running, but find it very challenging as I started on the journey late in life, I am thrilled that my kids have got comfortable with it at a young age :).
Posted by Aparna at 4:50 AM 6 comments:

When we set out to buy a phone, one of the first things we do nowadays is to look up reviews online. And this is just what I did with the Xiaomi Mi6. I checked out what the phone and the general interface looked like at a local Mi Store, and then looked up a lot of reviews, including ones that compared it with others in the same category. Nearly all of them raved about the features, marvelling that so much was available at the price point they were selling it at. As my intro to Android, I felt it made sense to not spend too much on a high-end brand/model and decided to go for the Mi6. My 1st BIG MISTAKE. It might be better to pay a premium to ensure that you're given some respect as a customer, and also increase your chances of getting a good product.

The thing is, as long as the phone works fine, everything is smooth. You never need to experience anything other than the online buyer and platform, and can go on with life. In looking for a good deal, I decided to go with a seller other than the official Mi Store - my 2nd BIG MISTAKE. I found out later that as the phone was an "export model" not purchased from the official Mi store, it would not be serviced by the Xiaomi service centre in Singapore, even on payment. Basically, not official store - might as well be fake for all I care is the brand standpoint.

As soon as I received the phone, during the initial set-up we realised that there were issues with the touch. It is somehow ingrained in me that I can't "just return" stuff, so I decided to check a bit more if there were some issues because of varying temperatures or some other reason, and take a call on it a few days later. My 3rd AND BIGGEST MISTAKE, for sure.

Here's the story after that:

1. Soon after the cover smashed, I went to the Xiaomi Service centre, as I still didn't know that the brand didn't care about my "export model". Waited more than half an hour with token et al, to be told in 2 minutes after a check of the IMEI number of the phone that they couldn't service it, even if I paid for it. I was directed to find a "third party" service person.

2. Along the way, I had also messaged/emailed Lazada and Xiaomi. While Lazada was at least responsive (while as "just" a platform also not taking much ownership of the product), Xiaomi was definitely my worst customer experience ever. Other than standard responses telling me how sorry they were, there was absolutely no BRAND PRIDE and no offer of actual help. I was always clear in my interactions that I was not claiming any warranty (which wouldn't be relevant after the break anyway) but only wanted a trustworthy service option.

3. I even went to the seller (iSky Trading) offices, as I was directed to them by Lazada, to figure out that they were hardly forthcoming and would only offer to send the phone back to China (including the to-fro postage to my expenses) without even an approximate quote or an assurance that it would resolve anything.

4. I checked out a few service centre options in my neighbourhood to be told that since it's a new model, no one was willing to check it out. Finally found someone in Sim Lim Square - the touch issue had got worse by then, and the only suggestion by the repair guy was to change the entire touch assembly.

5. By now, the touchscreen was completely crazy, with days going by without the phone responding, so I had started using alternate phones (had a delightful experience changing my iPhone battery, and even managed to complete a long-pending flash of OxygenOS onto an old OnePlus One). I was just carrying around the Mi6 like a decoration in the hope that I would find someone willing to open and diagnose the issue, before I had to opt for the last hope of replacing the assembly.

6. I also joined the Mi forums and posted there asking for help, which led to getting a suggestion to check the touch cable/ribbon connection or else change the touchscreen itself as the last option.

And so here I am, basically wondering what to do next. I rarely rant on my blog, but this was something I just had to get out of my system, so I thank you if you managed to read this far.
Posted by Aparna at 5:09 AM 2 comments:

Realm of the Elderlings by Robin Hobb: A Quick Review

One of the lovely things about a library system like Singapore's is that it has made me try a lot of books and authors that I might not have come across otherwise. Being able to borrow and return from any branch of the library is an amazing convenience, and we have made full use of it as a family. I am known to even plan my eating out or shopping based on which library the books I (and sometimes the kids) want are available at ;).

Fantasy is one of my favourite genres and towards the end of last year, I was thrilled to come across a new (to me) author in Robin Hobb. A few of her books caught my eye in the library, and I then also came across a recommendation from someone soon after, so I took it as a sign that I must try out her work.  If I needed any more encouragement, I found that she is quite prolific, and as a "series" fanatic, I just had to take the plunge.

I started with the first set of books (the Farseer Trilogy) that introduces the protagonist who is quirkily named FitzChivalry, and was done with them in a week or so. It was then I realised that there was a chronology and ideal order of reading of the series, so of course I had to read them in that order only ;). The next set is the LiveShip trilogy, which is quite spectacular reading, but seems to move away from the hero of the earlier Trilogy, and introduce an entirely new set of characters. I noticed though, that there were some hints of a connection with some names of places being referenced in both sets. Before I missed Fitz too much, he was back in the Tawny Man Trilogy, set some years after the first set of books. There is again what seems to be a divergence towards a dragon themed set of 4 books, but as you read you realise that it ties up with the tales of the liveships. Finally, Fitz is back in the final trilogy, and the author deftly brings together the entire universe of characters as she concludes the tale. 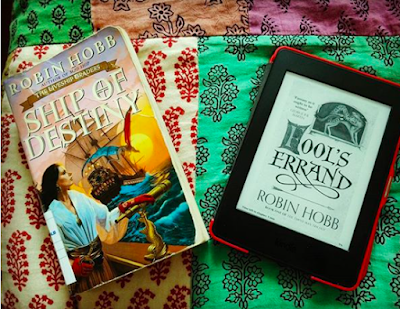 I think it took me a couple of months to get through the 16 books of this universe.. and I absolutely LOVED how the last book brought it all together and gave closure to a lot of the streams of storylines along the way. I found a couple of the books to be a bit slow-moving in parts, but the richness of the characters and just the details of the story kept me going. I found most of the books in the library, and also bought a few to read on my Kindle when I occasionally couldn't borrow them, because it's the kind of story that you are compelled to keep moving through.

Though it sounds like I got through the books pretty quickly, I find that as I grow older, I actually tend to read a bit more slowly and take in more details. My younger days were filled with speed-reading and re-reading, much like I see my 12 year old doing nowadays. Now, I try to savour it more, probably because I don't see myself spending time in re-reading an entire series all that easily ;).

So what are you reading at the moment? Do share.
Posted by Aparna at 1:44 AM No comments: