It's been a week!

D & S have been away from us for a week - they're at their grandparents in Chennai - and it's me who's been feeling the pangs of separation more and more! At first, it was peaceful and a nice change to not be answering questions every 2 minutes, but that feeling passed in a couple of days and now it's just weirdly quiet around here :(.

I am very proud of how well they are doing, especially S - though I wouldn't call them "being independent" for being completely fawned over by their grandparents as well as their older cousins or Chechis ! S has been fed by someone for every meal I'm sure - he went so far as to tell me - "I wanted to eat myself, but Chechi wanted to feed me ;)!" -- far from the truth of course.

D is sounding more mature in the 1 week she's been away - she narrates the happenings of her day so well that I hardly have to speak to my mom-in-law for details of what they are doing. But of course I remember times when she said very mature sounding stuff even when she was here. A few days back, she asked me how she was looking (she'd chosen her dress and accessories herself), and then replied to the question herself "Even though I might think I don't look nice, you will always think I look nice!"

Ooh well another week to go, will just have to keep myself busy :).
Posted by Aparna at 8:33 AM 8 comments:

This was one of the first questions we had to clarify to D once she started watching movies with us.. though I'm a bit particular at keeping her/them protected from too gory or scary stuff, I found that even for the family drama kind of movies, she would quickly picking up on who was the "bad" man! I guess children do take in more than we give them credit for, but I was amazed the first couple of times this happened. Probably this was the guy everyone disliked, or the guy who got beaten up by the hero, but I was very surprized she understood that much of what was happening on screen (It would be hindi or malayalam, a language she did not always know well) It was always important in any movie for her to establish - Is this the bad man, is this the good man :).

It used to go to the extent of discussing why bad things were happening to one particular person, though he was a good man! I am definitely not at my best for philosophical questions, so I was stumped at that one :). Made me realize that there is very little that escapes them, even at a young age, so we need to be extra careful of what they are exposed to. Don't even get me started on Chota Bheem which is the current favourite!

This of course happened a couple of years ago, why it came to my mind again is that now S has started asking the same kind of questions :). So I was wondering if it was a common thread among children or just in our household.
Posted by Aparna at 2:18 AM 12 comments: 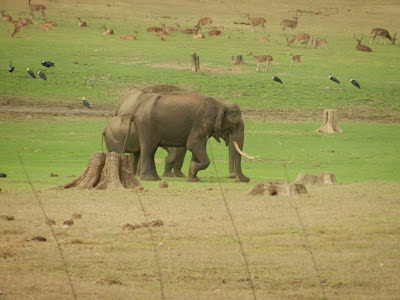 Let me start off by saying, please bear with this post being a looong one, cos I have just so many photos I need to put in it, and anecdotes for nearly each photo too ;).
Like this elephant family that we finally saw near the lake. Since the dry season has gone on for so long, the grass is very sparse. So the elephant moves its foot back and forth over the grass to loosen it at the roots, and manages to get slightly more quantity that way. It was wonderful to see this in person, and also see it explained in a documentary later that day, sort of like seeing National Geographic scenes in person, but sad ones :(. 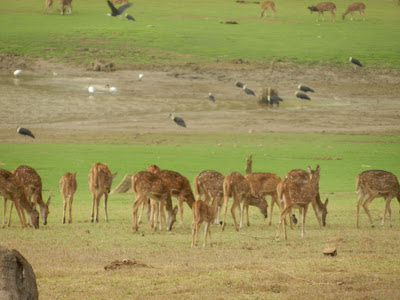 More of the spotted Chital that were really in large groups near the lake. 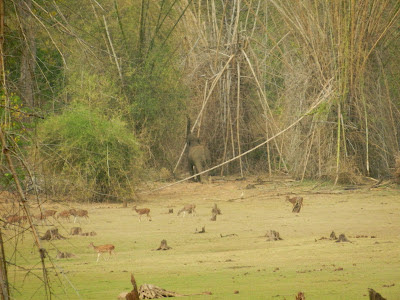 This elephant was reaching out to the bamboo leaves with its trunk so I had to try capturing it of course. 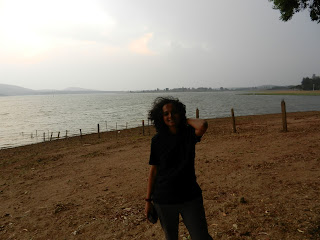 Me at the end of the day at the reservoir/water body close to our cottage.

We decided to go on a safari on the 2nd day too instead of taking the boat ride which is the common option. But our 2.5 hour boat ride at Thekkady sort of stood in my mind too much, and there was a better chance of seeing game animals on the safari.

The larger and slightly less common sambar deer - they are plain brown and can really blend into the background. Not as tourist friendly except for the occasional one which literally posed for the camera! This one I caught just before it ran away. 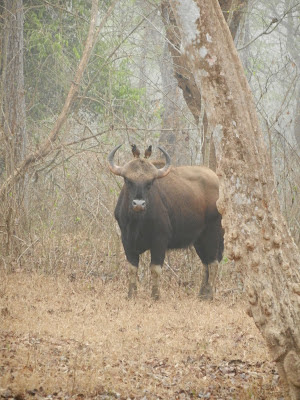 I was very thrilled with this photo - we had stopped to watch the gaur up close. First one bird came and sat on its head so I started clicking away, then to my delight 2 birds sitting in such lovely synchronicity :) ! Fun fact about gaur: There are no bison in India, all the large buffalo like ones are actually the cow family and are Gaur. Bison are the buffalo family. Realized that on our Thekkady trip even the guide was talking about Bison, so this fact really stood in my mind! 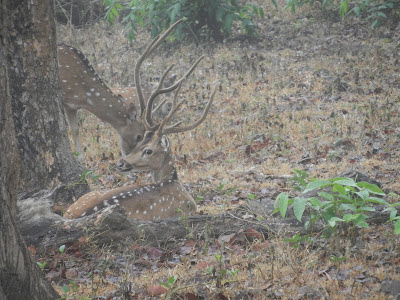 More posing by the Chital, loved the angle of its neck in this one 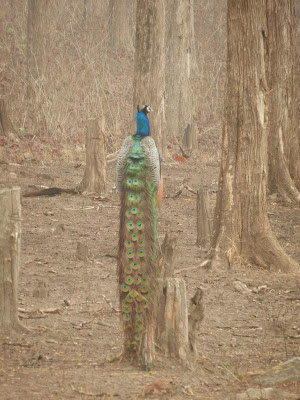 Another unusual one, for me atleast. Caught the peacock sitting on a tree stump and displaying its feathers so beautifully! 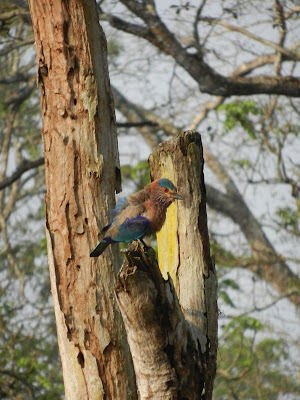 Took so many photos of the Blue Jay with my powerful zoom and then finally we saw one so close up so got a lovely detailed pic!

The supposed unusual sighting we had on the second day was a group of wild dogs (thankfully at a good distance) who were eating their kill, a deer. This was early in the morning and the photos are pretty blurry, which was good in a way as I really did not want too much detail for this scene :(. I was never fast enough to catch it in flight with its beautiful wings opened up, but this was a fluke photo as I was clicking it sitting, it opened its wings and flew :).

For the record, we DID NOT see any leopards(rare) or tigers(even more elusive) so my respect and mystery for these majestic animals is more than ever (yeah you can call it sour grapes too ;)). On our Day 2 safari, we encountered our safari guide/driver from the previous evening and he had seen 2 leopards that day! So just the luck of the draw.


The humans on the safari, I am sure the animals find us as much of a spectacle as we them. :) 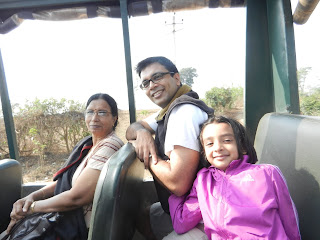 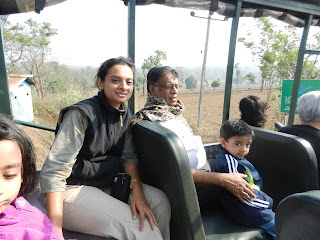 And one more with a smile to wrap up :). 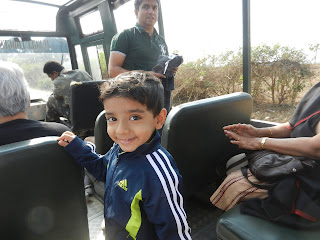 Added later: D is at such a lovely sensitive age now when she picks up on everything around her. We watched a documentary at the end of the first day which told us about how the animals find it really tough in the dry season, and once the rains come how green the forest becomes again. We did not discuss this at all afterward, so I really didn't know how much D comprehended. But last evening's rain brought out a statement from her that made me proud - "Amma, now the forest will be green again and the animals will have food !".
Posted by Aparna at 7:21 AM 9 comments:

This was one destination I've been wanting to visit for YEARS, somehow kept putting it off from year to year until I finally decided This is it, has to happen, and went ahead and booked it :).


We left home at 5:45 am as I had estimated 6 hours to get to Kabini and allowing for a stop for breakfast I thought we would make it decently in time around the 12 pm check-in. It seems I overestimated the time quite a bit, as even with a 45 minute break and the unexpected stretch of bad roads we reached by 11 am!! Of course this meant the previous occupants of our rooms had not even checked-out yet :O !

Though I knew this is a government run enterprise I did not expect the completely no-nonsense approach. The "check-in" was very basic, just involved giving them the reservation print-out (we had booked online and got a 5% discount), and we were directed to our rooms. Only on reaching them we found that they were not empty yet!! Generally hung around, tried out the hammock and so on until the rooms were vacated, then cleaned and we could go in and relax. 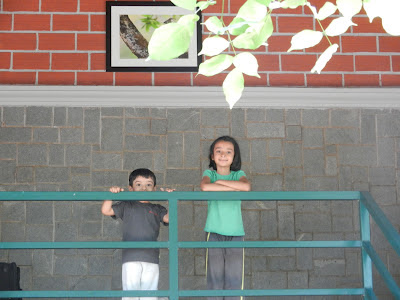 The rooms are nice, luxurious bathrooms, but no TV, no phone. Their concept is that there are some room "boys" allocated to a group of rooms and they are usually at a reachable distance so you can ask them if you need anything. In any case since the main activities involve safaris or boat rides you end up not spending much time in the room so their idea works out pretty well! After lunch and a rest and then tea/coffee at 3:30 it was time to leave for our jeep safari. Loved the construction of their vehicles in which each row of seats is at a different height so the view you enjoy from any seat is great!

On our Thekkady trip, literally the only animals we saw were monkeys, so when we saw our first langurs I was secretly going "Oh no not again!" in my head! But still, this monkey family had me wanting to get a good picture :). 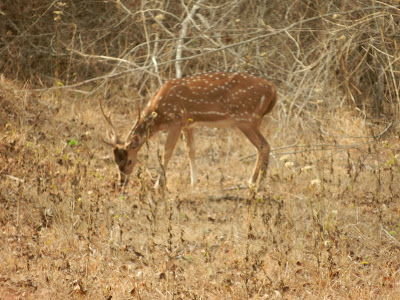 We see the first deer - full excitement from me of course - clicking away - wondering why the jeep driver/guide is not slowing down so I can get a better shot - only to hear "Don't worry you'll see lots more deer!" and thinking "Hmmph!". By the end of the second day, I wouldn't even put on my camera to take another shot of deer, and thought back to this wise saying ;). 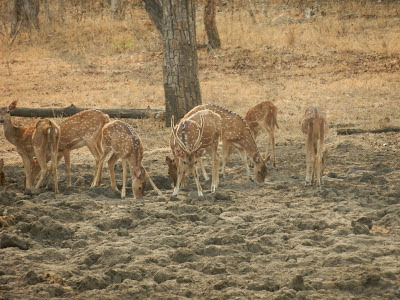 Just adding a few of my deer photos .. I really liked the ones where I got one looking straight at the camera.. Liked the "camouflagey" effect on this one.. it was amazing to see how they disappeared into the trees/grass but not usually in a hurry - they were used to us "tourists" obviously. 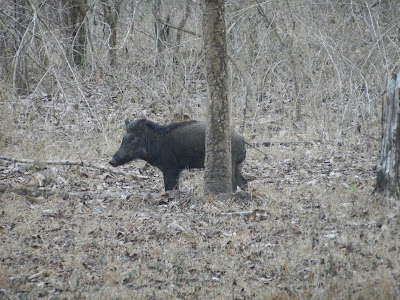 In my usual style (and to show off the photos properly!) this is turning into a part 1 of course ;). So just leaving you with a wild boar sighting - we saw just one of them on a total of 2 safaris so didn't seem to be too common an animal in the forest.


Uma, I do realize that some of our animal photos are eerily similar :). No leopards on our trip though, grrrr !
Posted by Aparna at 10:23 AM 4 comments: