Until the time I when I was in college, and probably even the days after I joined work and the early days of my marriage, I would call myself as on the diffident and even naïve side.  A hesitation to ask questions even to get information, an inability to say no to anything… and so many other such things were a part of my personality. So much so, that I never wanted to go shopping on my own or anywhere on my own I guess. I’m sure hubby remembers those days when he was really busy with work (that hasn’t changed ;)), and I would grumble about not going “anywhere” as he wasn’t around.

I can't put my finger on when this started to change, or even why. May have been with being forced to go on my own to begin with, but so many things along the journey of life have changed the person I am now, especially in this regard. Shopping is nearly always alone, occasionally with like-minded friends, but hardly ever with family, unless it’s a weekend outing as such. I learnt early on that taking the kids along to a place like Shoppers Stop (the closest option to where I stay) is asking for trouble, as I would lose track of them in the high aisles! Not to mention when they enter the phase of “asking for things” ;) !

The thought really hit me today, as I was sitting and having breakfast alone at a restaurant, as I had missed eating when I rushed out of home to go drop the kids somewhere. I did not even need my 3G to entertain me as I sat there, just the food and the scenes through the window were good enough J. It seems I am really at an age and phase of being at peace with myself… Felt good!
Posted by Aparna at 8:52 AM 9 comments:

Email ThisBlogThis!Share to TwitterShare to FacebookShare to Pinterest
Labels: changing as a person, Going solo

What's up with my garden?

Well.. I haven't written about it much, and the reason is the pests have been driving me crazy! I was tempted to write a post about the varieties of mealy bugs my plants seem to have at the moment. I don't know if it's because they are low on nutrients, or the tree overlooking my terrace is somehow contributing to the infestation.. whatever the reason, the end result was disheartening to see every time I went to the terrace :(.

The evening was spent in trying to save my guava plants which are the worse infested at the moment. This meant spraying and wiping off the underside of every single leaf, and pruning the ones which were worst off, even one or two that had a couple of buds on them :(. Fingers crossed and hoping that this helps, and the plants start looking better before I have to go on holiday and leave them to someone else to look after for a whole two weeks!

Not all is bad news however, I did get a few tomatoes recently :) 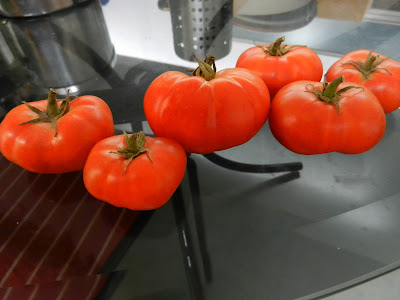 A short temper is something I've struggled with a lot, especially after becoming a parent. It happens so often that just when I feel like I'm getting better and have a handle on things, I start flying off so often on the kids, and then regretting it in 2 minutes :(. Yes, it might be the summer holiday effect I guess.

But I saw something today, that brought my own shortcomings to the fore but also weirdly made me feel just a bit better about myself. It was at the class that my kids go to 3 days a week (yes I'm being a bit vague on purpose). I suddenly heard this gentleman, one of the parents, really raise his voice in anger against one of the older boys who had apparently corrected his daughter on something. From what my kids tell me later, I don't think the boy was particularly picking on the girl or being extra rough with her. It may have been the culmination of other incidents along the way, which all built up today - I don't really know. But whatever the case, it does not justify displaying your anger in public, and even more when it's on someone else's child! That boy was definitely quite scared, until the discussion was taken over to the teachers, and even then the raised voice of that parent was maintained for a few minutes more with all of us on the road and many metres away being able to hear "How dare he behave like that to my daugher?".

As a fellow parent, I would like to justify this over-protectiveness at least a little bit, but unfortunately my churning stomach at witnessing the incident wouldn't let me do this. And this is coming from someone who has no trouble telling off other kids if they are in the way of my child's safety. But I dare say, I prefer to do it more gently and if that does not work, I would just remove my child from the scene. I don't think he did his child any favours too, as now everyone is just going to be on tenterhooks around her, which cannot be a great feeling.

I wondered how I would react if my child was on the receiving end of something like this parents' tirade. First, I hope he or she is strong enough to take it without erupting into tears, of which the boy in mention did an admirable job. Next, how much ever I would love to go and confront this father and tell him what I thought of him, I hope that I would be able to hold back enough to just talk to the teachers about it and entrust them the responsibility of calming the waters.
Posted by Aparna at 7:00 AM 10 comments: