The initiative against Child Sexual Abuse is something I first heard of in April 2011 through the blogosphere and since then I have realized that many bloggers and friends that I know are involved in it. This post is me trying to do my very little bit to increase awareness and try to fight this scourge one parent at a time..

Many brave folks have come up to talk about dealing with CSA when young, the most recent being Kalki Koechlin. I think this incident and the openness that she and others have displayed is a wonderful step in the right direction. What can I as a parent do to make my children more aware?

- I believe that a child should be taught first of all to respect their body and that of others. Modesty should never be confused with shame, which I think is a differentiation that is not always made. One of the things that helps and one that we practice at home is to use the correct words for parts of the anatomy, though at a younger age words like "dicky" serve to make them understand as well.

- Another step to avoid any feeling of shame is to ensure that topics like menstruation and periods are never considered dirty or a taboo topic to be discussed. I found the book "Just for Girls" a wonderful approach to teach my nearly 9 year old daughter a lot about changes in her body. I hope this will serve as a gentle introduction and accompanied by some matter-of-fact discussions, she would be fully ready by the time she has to experience this. Needless to say, there is a "Just for Boys" version as well that I'm waiting for a couple more years to get my hands on, I suspect even I might learn stuff from it ;).

- My biggest challenge is trying to traverse the line between being a protective and careful parent and turning into a slightly paranoid one. Every time there is a piece of news about CSA I have the urge to not let the kids out of my sight at all. I try to achieve middle ground by sending them out into the world for essential things like going to school and keeping my peace for supervised play where there is at least a parent within calling distance, but I draw the line at playing on the road with no chaperones.

- Start talking about good touch and bad touch at a young age, though it is up to us as parents to make children aware without scaring them. This is one reason why I repeatedly speak up when I see this video posted, as I feel it is too graphic and could scar young children. For older children it may be ok, but only after this topic has been spoken about and discussed in detail, and definitely not as an introduction to CSA!

- It can be tough in a social country like India to teach a child to be disrespectful to strangers, but in my opinion it's much better to keep them safe even if it involves a few bent egos. A general introduction of everyone as "Aunty" and "Uncle" is really not the safest aspect of our society!

These are some small steps that we have tried to take in our home, and I sincerely hope and wish that the awareness spreads not just to parents but to all caregivers. The school is the one place that children spend the most time in other than at home, and every last person from the teacher in the classroom to the ayah in the corridors needs to be aware!

Posted as a part of CSA Awareness campaign in April 2014, and will be linked to the main CSA page at http://csaawarenessmonth.com/
Posted by Aparna at 12:30 PM 4 comments:

B is for Baggage

As I mentioned in my previous post, I was surprised to find that baggage allowance on domestic flights in the U.S. might not be as generous as the international ones. Thanks to Southwest I think most of my worries are taken care of, but I would still need to check restrictions of weight and size before investing in some new baggage.

A kind friend on FB also suggested that I should pick out some unique colours so that I would easily be able to identify them on the luggage trolley - best real reason for buying colourful luggage that I've ever heard, and I'm taking full advantage of it ;). What do you think of this one? 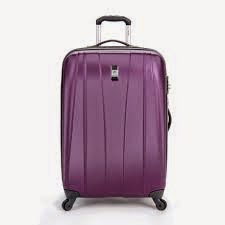 For easy reference for other travelers, the baggage allowances are as follows:

Emirates Economy: 2 bags of up to 23 kg each (and yes, we're traveling with 4 tickets so I'm wondering what all I can bring back ;)).

Southwest Economy: 2 pieces of checked baggage allowed for free, each piece should weigh less than 50 lb (which is around 23 kg it seems), and should measure less than 62 inches (l+h+w) in dimensions. I'm guessing the common brands would adhere to these dimensions but might take a measuring tape to the store in any case ;).

Realized that I need to keep the carry on baggage dimensions in mind thanks to a hint from another kind friend on my first blog post. For Southwest, max dimensions are 10x16x24 inches, and for Emirates 7 kg and 115 cm (Wondering why they specifically mention travelers boarding from India - do we have a history of carrying over-large pieces :P?).

I don't think I've ever looked forward to luggage shopping this much ;).. hoping to be packed and organized by next week unlike my usual last minute self - Do you think I'll manage it?
Posted by Aparna at 2:35 AM 5 comments:

After much temptation I decided to not take up an A-Z challenge that some fellow bloggers are doing in April, simply because I didn't think I could do it justice with a lot of other things going on in my head right now.

Wondering what the heading's all about considering I'm not doing the challenge ;) ? It's time for our next holiday, one full month and to the U.S of A. Since holiday planning is driving me a wee bit crazy, I thought I might as well start my own A-Z challenge revolving around the subject ;). Definitely won't reach the end of the alphabet before I leave on the 18th, but for as long as it lasts..

Here are the first steps I have been researching for what seems like weeks now, no wait - it really was weeks!!

Places to stay: There are some cities like New York where we don't know too many folks except for a few friends whom we didn't want to impose on. Other cities where there's family or really close friends that we're in touch with, I decided we'll be shameless and accept all welcoming offers ;). We are spending the first few days in Dallas with close family, so I am keeping fingers crossed that the kids will be over the jet lag issues by then.

Domestic flights: We are going to be criss-crossing the country quite a bit, so this is a big chunk of the decision making. I was taken aback to find that all those cheap fares that I saw on kayak.com while assessing the budget were not the cheapest after all, as most domestic carriers charge extra for check-in baggage (some like Spirit for carry-on baggage as well!). So after consultations with a cousin who is now based there and is the super-researching kind(You know who you are ;)), most domestic flights shall be with Southwest as they offer 2 pieces of check-in baggage for free, and give good rates as well. Cancelable flights for domestic travel - you can sorta forget about that it seems unless you want to spend a small fortune for that requirement :P.

So Step 1 is "more or less" taken care of with all hotel bookings done through expedia, and friends or families duly warned ;). Step 2 is still going on, hopefully should be done in a day or two. And then we go on to the plans of what we'll actually DO or SEE in those places! As is always the case when traveling with kids, these will have to planned with a lot of breathing space in between so as to not tire them out, though it is nice to be planning for an 8 and 6 year old rather than a 5 and 3 year old :).

Friends in the U.S. who read this, feel most free to chime in with suggestions of things to do and see :) !!!
Posted by Aparna at 9:12 AM 8 comments: