Semakau: Visit to a Landfill

If you know me personally, it is very probable that you have heard my views on waste management ;). Thanks to getting to know a lot of amazing environment conscious folks when in Bangalore, some time after I started composting at home (my first post on the subject in 2011 here), I also started segregating my waste. This was some time before it was made mandatory, though unfortunately I didn't see enough enforcement especially at the individual home level, even till the time I left in Dec 2015.

When I first started living in Singapore, I was a bit confused by the lack of waste segregation at the household level, and wondered how a country this size handled its waste. Enter Google and other useful links shared by folks in a local FB group, and I slowly started getting the picture. I also looked around for organizations that I could volunteer with, to make some small contribution in the area of sustainability, and found the Singapore Environment Council or SEC. Thanks to them, I have made a couple of trips that helped me understand the waste management in Singapore a bit better. I also hope to volunteer in a couple of upcoming events, to do my small part in making a difference.

Step 1 in the waste management process here is removing the recyclables - this is ideally at source in our homes - mainly plastics/paper/glass and a few other components. Recycling bins are provided all over the island, and the contents are taken to centers where they are segregated into different types before being taken to bigger centers where they are processed in different ways. Some removal of recyclables is also done from the mixed waste collected from homes, to minimize any plastics and non bio-degradables that might reach the next step. A visit to a recycling centre(my first trip with SEC) threw some light on the importance of details - how plain paper is easier to recycle as coloured paper needs some treatment to remove the inks, for example!! 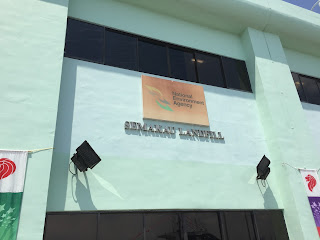 Step 2 is the wet or miscellaneous waste handling and incineration was the process of choice. To someone like me, that sounded almost blasphemous, as burning of mixed waste was a big problem in Bangalore, especially as it is done in open spaces and exposes everyone to the carcinogens it lets off. Here however, it is a contained process, with large incinerator setups in different parts of the island. These are called waste-to-energy plants and our tour guide jokingly mentioned about how we pay for our waste to be disposed and then also for the electricity generated from it :). The resulting gases

Step 3 is the handling of the ash which is the main end product of the incineration process. This is where a landfill enters the picture. My head used to throw up scary landfill images which are based on what I've seen in pics or in person in Indian cities - huge mountains of refuse with scavengers hanging around and a stink that is far reaching. That image is now changed for ever.


Singapore has kept the landfill away from the main populated areas by making an offshore one out of two of its islands (Pulau Sekang and Pulau Semakau - see pic below). Large ferries bring the ash here, and they are then transported by lorries to be dumped into assigned areas. The dumping zones have been created by building an encircling wall that includes an impermeable geo-membrane, and the sea water is regularly pumped out to adjust the sea level. Once the maximum level has been reached, a few feet of topsoil is added so that the upper layer is fertile and can serve as a home to greenery.
(Side note: There are also some leachate handling plants on the island that serve as backup if any of the incinerators might give out for any reason.)
We learnt in the presentation that followed the tour that while the earlier practice was to make smaller zones out of the entire dumping area (as shown in the top part of the pic above), it has now evolved to using one large zone which seems to work better for their needs. A movable platform serves as the base for the trucks, and as one portion fills up, the entire platform is moved to the next part.

There is a lot of thought about affecting the water quality around the islands, and some of the eco-conscious measures that have been carried out include:
1. Mangroves at the ends of the island - these create a root barrier for flotsam, as well as act as a warning sign for deterioration of water quality - the foliage apparently would start showing significant areas of drying up which would immediately trigger extensive tests and remedial measures.
2. Testing wells - These are numbered and located all over the island. A water sample from each is tested once a month, with the number pinpointing the location in case of any unusual results.
3. Marine life - Spotting of marine life such as dolphins and otters is considered a positive sign, to indicate that the island provides a comfortable environment for these species.

To make the best use of the space here, there are also trial runs of a few chosen industries. Some of the mentioned ones were deep sea fisheries, work on biodiesel using the plant Jatropha, and a company that is working on harnessing natural energy from solar, wind, and water.
Posted by Aparna at 11:07 PM 3 comments: