It was the morning after the first fallen tooth! D woke up and came to me with a disappointed look "Why didn't the tooth fairy visit me?".
A broken promise! I had forgotten to perform my job as the fairy's messenger. And I said to her "Don't worry, she's just late! She'll be here tomorrow.".

55-er written as a part of the Drabble Week challenge at my Marathon Bloggers group. Taking a break from my travelogue, but need to complete that soon as well :P.
Posted by Aparna at 5:46 AM 4 comments:

L is for Liberty

In the interest of my sanity, I am going to criss-cross over the rest of the letters a bit ;). Else I am never finishing this travelogue or I'm just going to forget large parts of it. I'll still try to cover all the letters, but not in order.

After our Niagara tour, we got back to New York to the same hotel for the remaining couple of days there. I had booked the Statue of Liberty tour for our last remaining day in New York, and that's what we did. Thinking that it would be tough for the kids to get to the crown (354 steps), I had booked only the pedestal tour but there were 215 steps even to get that far! I was the one who huffed and puffed the most of course :P.

We took the ferry from the Jersey State Park, thinking it would be the closer point for us from our North Bergen hotel. On the way back you can take the ferry back to NY as well, and that's where we did, getting off at Battery Park. Met a friend of G's who showed us around the Wall Street and the Twin Towers area, which we might have missed if not for a guide like him.

And that was the end of our NY part of the experience. Next stop Bay Area.
Posted by Aparna at 2:35 AM 2 comments:

To a gardener, G has to stand for gardens :). Let me digress from my ordered travelogue to write about some of the gardening experiences I had on this tour..

Climbing the 400 steps up to Coit Tower in San Francisco got much easier once I saw the greenery on the way ;). These giant nasturtium leaves caught my attention immediately. And yes, my kids were such good sports they climbed with me with only a wee bit of complaining! 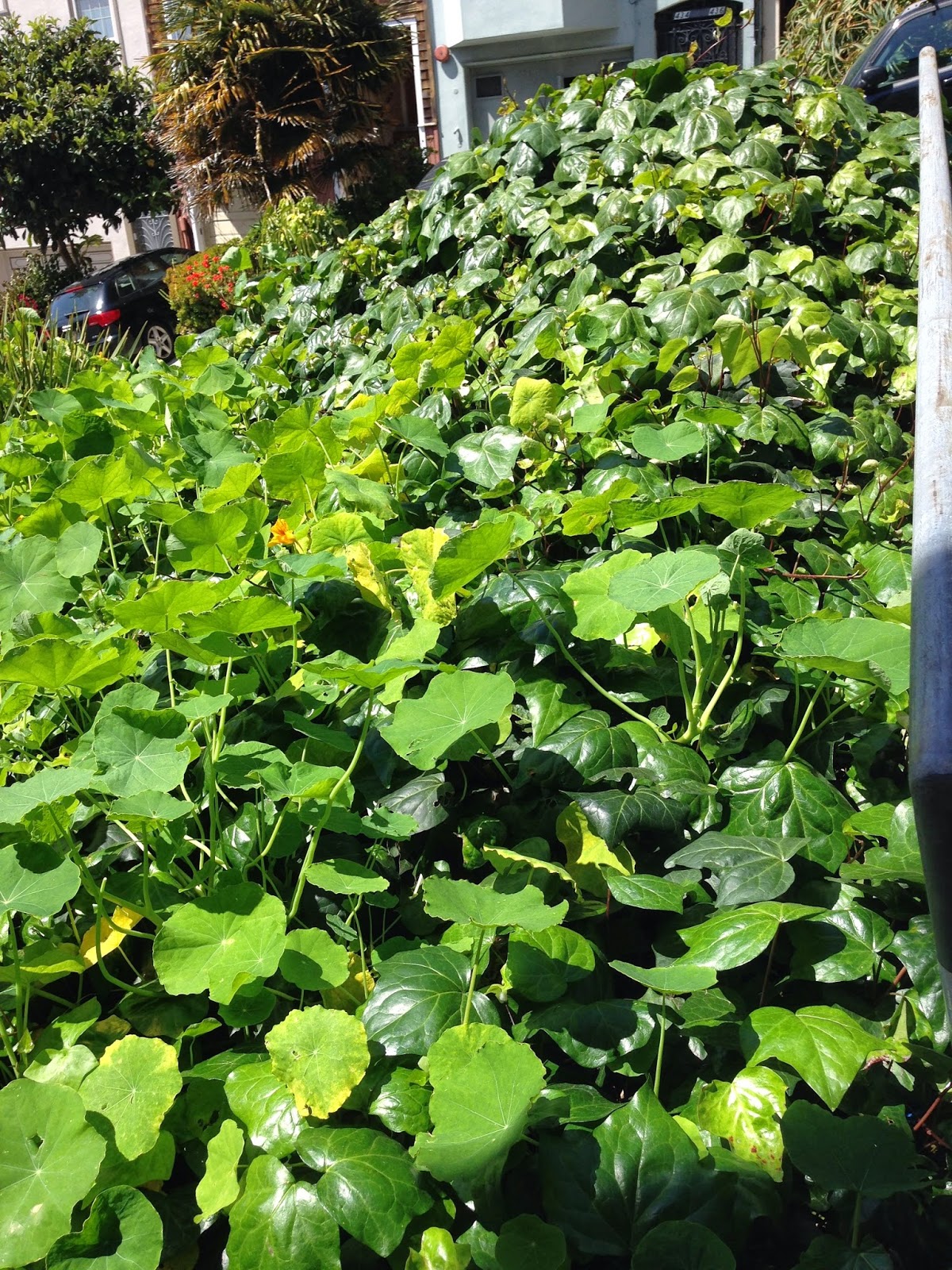 These pics are from a friend's place where I stayed in Fremont.

The next pics are from Sea World at San Diego where I must have been the only one more interested in this small garden space :).


After hearing so much about the gloomy weather in Seattle, I was amazed to find clear sunny skies and the most amazing greenery all around. This tree just amazed me with its majesty. 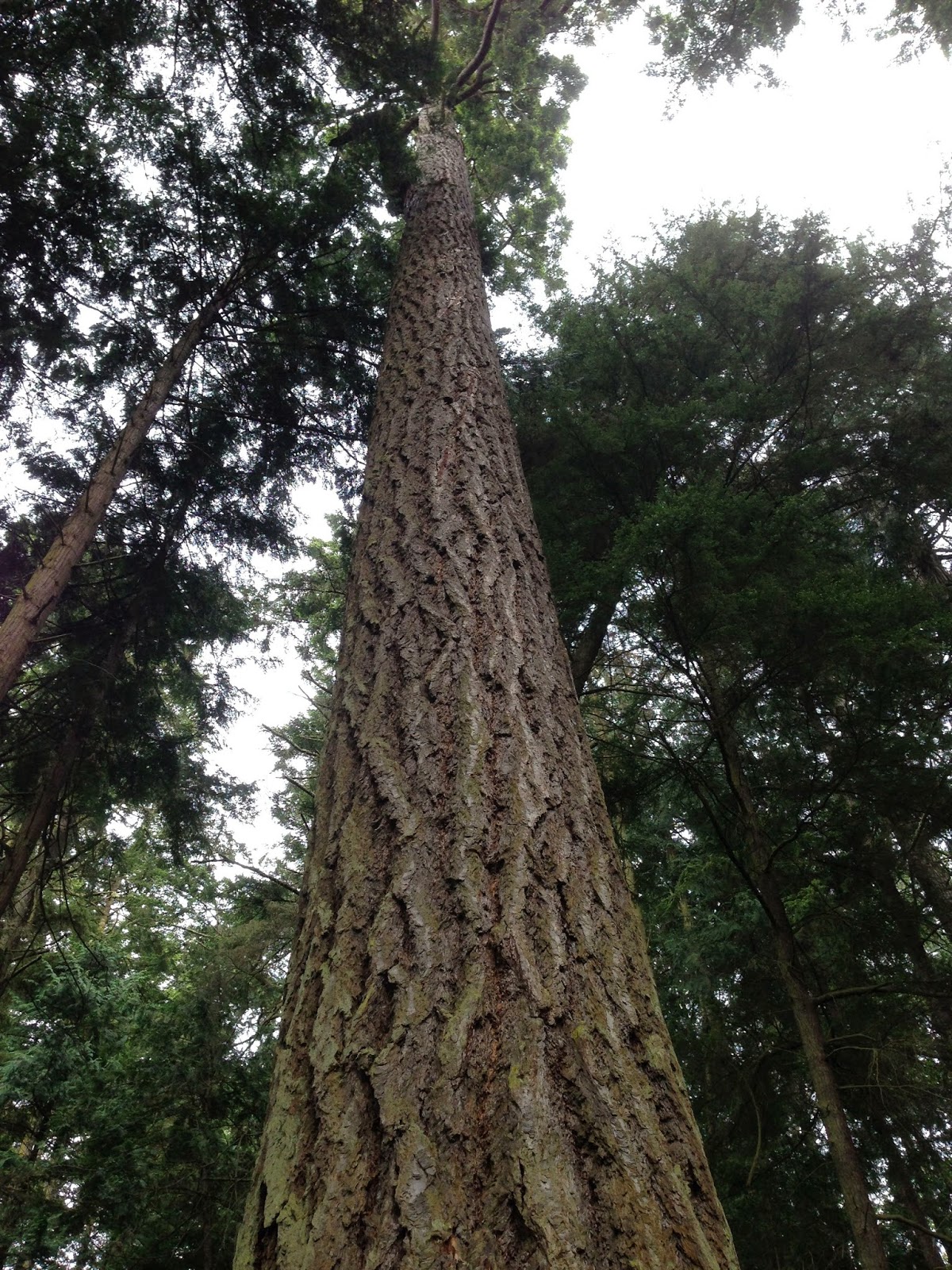 F is for Frozen!

Yes! Frozen is exactly what the Niagara Falls were in December and even by the end of April when we visited, there were still some bits of ice in the water. This meant we did not get to go on the Maid of the Mist and see the horseshoe falls that I had hoped to. But the bus tour that we went on tried to make up for the missing bits by adding in interesting stuff:

Corning Museum of Glass: Other than the lovely examples of their work we also got to see a live demonstration of how they make an elaborate looking vase - most fascinating!


Fort Niagara: In typical Indian fashion, I turned up my nose a bit on comparing to our forts ;).. but still it was a small bit of the history of the place and right next to this lovely lake as well, so a nice part of the tour. 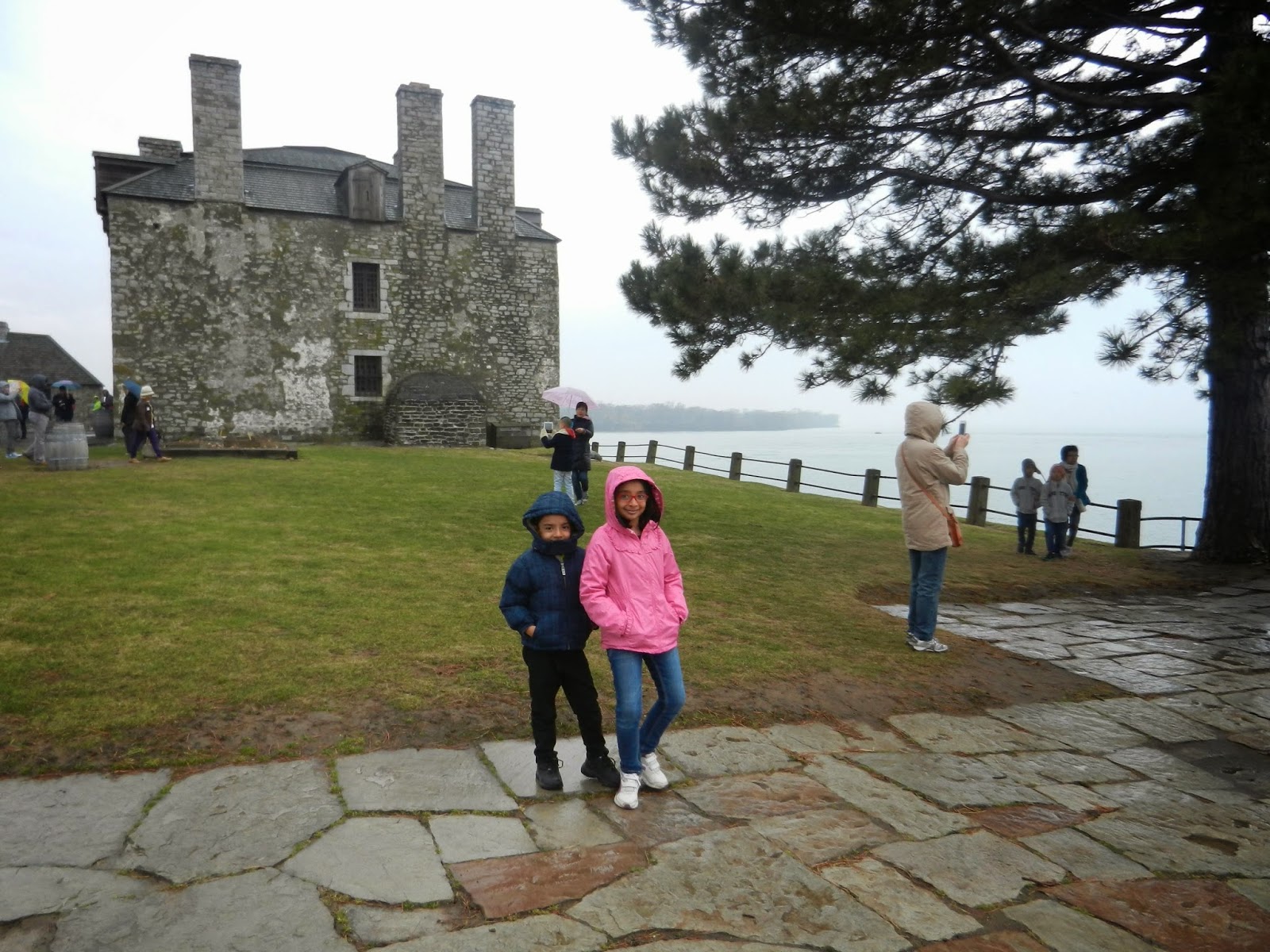 Views of Niagara: The first evening, we got to see the falls as soon as we reached but it was drizzling as well so we literally saw, shivered and ran back to shelter. Before we got to saw the falls again later that night, we were armed with ponchos and a lot more comfortable. We also got to see them once more the next morning before leaving the area.


Thundering Water Cultural Show: This was an American Indian show that illustrated the history of the falls, especially about the "Maid of the Mist" Lelawala.

IMax movie: This was an old iMax movie, but it sort of made up for missing the horseshoe falls by the spectacular views and angles that almost made me feel queasy!

Niagara Power Plant: We got to see the power plant that is responsible for supplying a part of the power to New York. The place also had some interesting activities for the kids (and adults!) to try out to understand the concepts of power better. 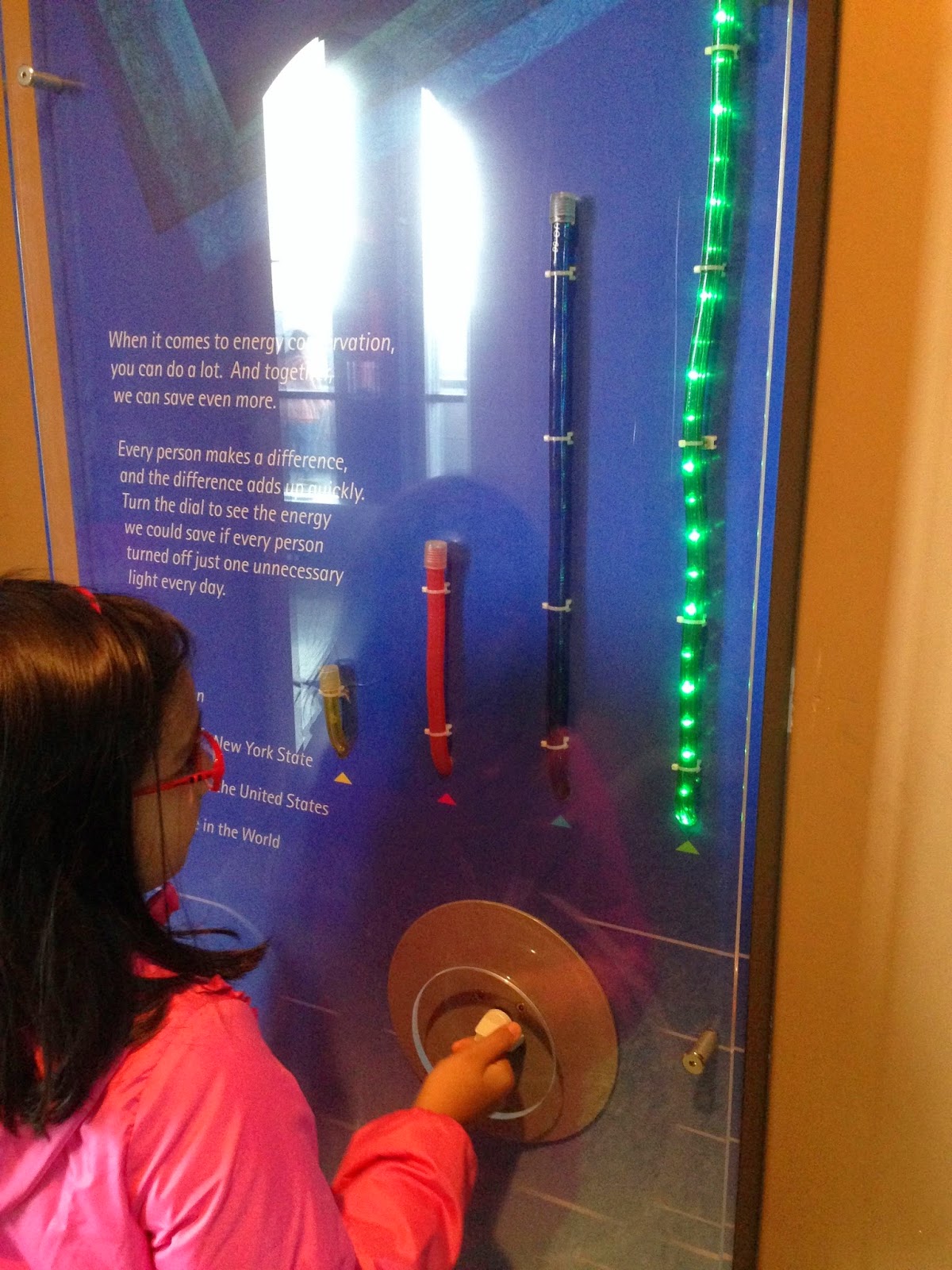 On the whole, I thought the kids adapted to the whole bus tour experience quite well. This was also because the stops were well-planned including restroom breaks where necessary. I would recommend this tour to those looking for a good value experience as the hotel that we stayed in for the night was also a pretty decent one (Sleep Inn). I can imagine it would only get better if the Maid of the Mist is included. Be warned though that the guides are bi-lingual, and announce all info in English and Chinese to cater to the large percentage of tourists from China. Wouldn't have been a big deal if not for some of them insisting on talking loudly over the English part of the announcements :P.
Posted by Aparna at 5:40 AM 4 comments:

Oh well, I have been stuck on E for a few days now and it seems high time to move forward. I considered EWR (The airport that we landed in to get into New York/Jersey) - that sounded very forced, or "Excitement" - but that one seemed so mundane. So well, Errr it shall be ;).

New York Day 1:
We left cozy and warm Dallas to be rudely thrust into the cold winds outside Newark Airport. Though we were sort of prepared with warm jackets for the kids etc, that's not quite enough for a total feeling of comfort. We took a taxi to the hotel (which I discovered was not in the best location :( ), to settle in the room for a bit. After braving the cold to get a bite for lunch, we spent the evening with an ex-colleague and old friend enjoying the night view of New York as seen from across the river at Hoboken. Also included was dinner at a Japanese restaurant featuring a Hibachi show.
New York Day 2:
We assumed our tourist avatars and went off reasonably bright and early on Day 2. The one saving grace of the hotel in spite of its slightly sad location was that they had a shuttle service to Times Square. Our first stop at NY was weirdly enough Starbucks as it was c-o-o-o-l-d! Waited in line for the 3+$ coffee (will not complain about CD prices again at least ;)), and hot chocolates for the kids, and then set out to see the American Museum of Natural History. Why we chose this one - it features in The Night at the Museum (that the kids had seen on TV) so they knew about some of the exhibits already :P. Plus I didn't think the kids would really understand or enjoy the art museums all that much.


I forgot to mention an interesting incident at the ticket counter - the lady at the counter told us that we could pay "whatever" we wanted to as we reached in the afternoon and wouldn't get a full day there. Needless to say, we were completely flabbergasted and had to have a quick discussion to arrive at a decent sounding figure. There was so much to see, and to do it some amount of justice we stayed until closing which was about 5:30. Then it was time to head off to find some dinner and hit Times Square in time for the bright lights and displays :).
We didn't hang around too long as we had an early start the next morning for our Niagara Tour.. more on that in my next entry, and caught the shuttle back to the hotel.
Posted by Aparna at 11:55 PM 4 comments: