I wrote a post on Positivity at the start of the year, and that's pretty much been my philosophy in life as well. I don't get alarmed all that easily, see the best side of things ... you get the idea. There are situations however, when you can feel so out of control that it is tough to stay all that positive. The one that I went through in the last week is when a loved one is in the hospital.

Once someone is admitted, you do need to pass over some control to the caregivers at the hospital, but it is also important to stay clued in and have an idea of what exactly is going on. This gets really tough in the present day scenario when you are faced with one specialist after another, each more interested in handling their part of things (the body?), and you end up wondering if SOMEBODY has the big picture in mind at all! Well, I am thankful to say, that this is one hospital visit where even if I feel frustrated from time to time, I have been able to make my views very clear. I keep pestering the docs and nurses for a complete view, and point out when there are inconsistencies between opinions. For example, even before a surgery was a certainty, there is some pressure to finish all the pre-requisite lab tests. Why should we end up bothering the patient and paying for those additional tests, if the surgery doesn't come about? Just for the ease of scheduling from the hospital and doctor's need, but who's checking from the patient's point of view? It's only our own responsibility to be aware and do the same. The nurses only needed a gentle questioning from my end, and did not force us whatsoever into doing the test, but if folks are not aware they would have just agreed to anything that was suggested thinking that it was a required clinical investigation. A big thanks to hubby for a contact in the hospital management whom I can turn to in extreme situations, which I didn't use much but it's good to know that there's a fallback option.

Of course I am very aware that the biggest reason that I was able to retain some degree of control and comfort was also because *fingers crossed* this was not an extreme emergency situation, and also did not led to a surgery scenario. That could have been a whole different ball game, and can lead to a lot more frustration and worries.
Posted by Aparna at 8:48 AM 3 comments:

Counter goes back to Day 1!

I was thinking a couple of days back, as to what my triggers are for yelling and realized that on some days you just feel physically low and this puts you on edge. I usually deal with this by announcing to the kids in advance "Amma has a headache!" or "Amma wants to lie down, please play softly!", and this works most of the time as children are after all pretty considerate little people :). For the remaining 10% of the time when they just forget, a few extra breaths and pauses and I somehow make it through.

There comes a situation though when you might be on edge, for reasons not completely in your control, such as a family member falling sick or a minor emergency situation. At such a time, unfortunately my reminders or tips did not help .. or they did for about 25 mins, and I managed to lose it in the last 5. In my defense, it was not my worst level of yelling i.e. the hyperventilating type, and the kids quite took it in their stride as they realized I had a lot on my mind. But since this is exactly the kind of time when I wish to not transfer my feelings onto the kids, I decided with a sigh to reset my Orange Rhino Counter.

Day 1 starts again today, January 22nd. Do watch my counter on the right of the page contributed by fellow blogger Sirisha and cheer me on please. Incidentally it also coincides with a 30-day challenge on the Orange Rhino page so that is going to be my first goal as well. 30 days without yelling, and I'm counting on blogging to get all the tough days out of my system ;).
Posted by Aparna at 6:33 PM 7 comments:

The word prompt for the week at Marathon Bloggers is "chance" and as I began writing this, I couldn't help but think that it was a bit of chance that we chose the Montessori school that we did for D. It is now our 7th year of association with the school!

Today I was invited to "observe" S at school, which usually happens about twice a year. Parents can observe the child's activities for half an hour and then have a short chat with the teacher. I was feeling quite emotional as this is S's last observation at the school before he goes off to "big" school next year. While browsing through my older posts that mention the school or the system, I found this one:

My first thought on reading this was - OMG he used to speak so much tamizh?!

Back to the subject, I can't imagine what a long way he's come and how much he's learnt in this amazing method of learning. The material covers such a wide range of subjects - take this Karnataka map they learn about for example:
They learn to add 4 digit numbers in a game format, and even activities like grating a carrot or sieving items of different sizes to separate the two. So many basic fundas that are going to serve them well in life, and makes our lives as parents easier too :).

With a lump in my throat at the end of the day, I wish the school lots of love and luck for the future and am sure they are going to grow as much as they aim to, and continue to nurture children the same as ever. 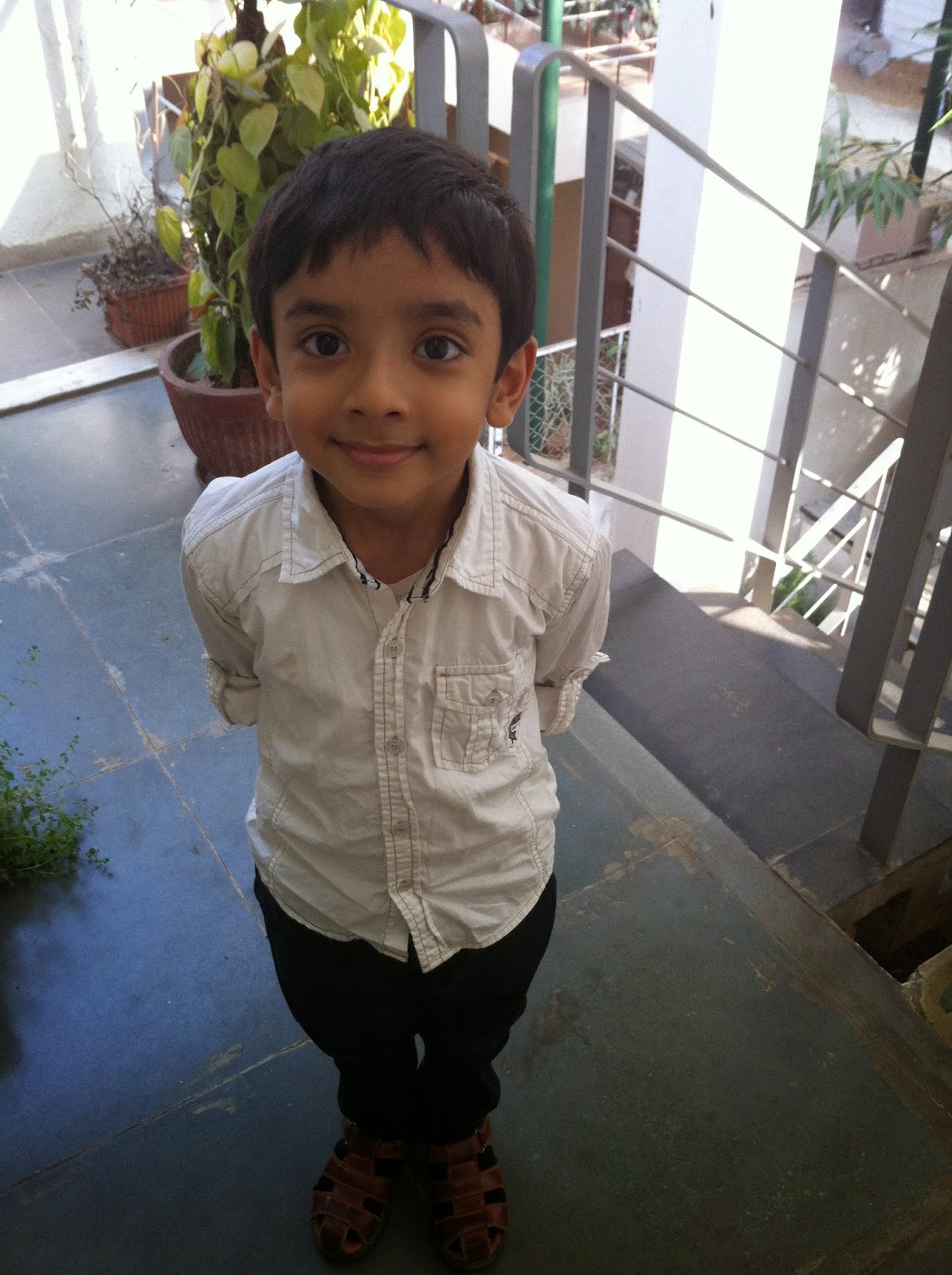 I've lost count of how many times I've mentioned this topic on my blog :P.. but I have of course been no closer to my goal of actually getting into and accomplishing the challenge for even a month. So I decided it's high time I got into a public announcement of Day 1, today the 15th of January, 2014. I am also hoping to set up a counter on the blog, which will be reset every time I yell and hopefully will reach my goal of 30 sometime soon!

Yet again a post from her that struck home, especially the first few paragraphs which are so much like what I feel sometimes.
http://theorangerhino.com/one-key-to-yelling-less/
Why is it that I can control my temper in public, but feel that it's ok to lose it in private? Nail on the head, and a thought that bothers me a lot!

So in my journey to yell less, here's my first personal tip:

Tip 1: My biggest challenge is to step back in the instants before a yell builds up, and the best way I've found is to verbalize my feelings out loud. I tell my kids "I'm beginning to lose my cool" or something similar. That results in both of us stopping and thinking and 9 times out of 10 helps resolve the situation at hand :).

Errr.. what was that again?

The day that D came back from school, wanted to know if she could access some "Trolls" website, and spoke to me about these trolls who are apparently "BFFL" (along with explaining the meaning no less), I just KNEW! The phase when I will have to start asking her to explain her lingo has started already !!

For the record, I did know BFF but not BFFL yet :P. I am hoping there are websites that would help me stay up to date ;).
Posted by Aparna at 2:32 AM 8 comments:

Email ThisBlogThis!Share to TwitterShare to FacebookShare to Pinterest
Labels: kidspeak

A couple of incidents that happened this morning and set me thinking..

1. I suddenly noticed a stain on a garment that I had washed and ironed with great care. After an initial Oh S*** reaction, I immediately got to figuring out what I could do for stain removal. Tried a couple of things, then just decided the garment needed to go through one more wash cycle.

2. The milk I had kept for boiling curdled. I didn't bat an eyelid and just went on to straining it and put it in the fridge, hoping to use it as paneer :).

I have consciously made an effort in the last few years to steer towards positivity, a lot of it comes naturally and sometimes I have to make that extra effort. But oh how freeing it can be! Here's to more positivity and happiness for all of us in 2014!
Posted by Aparna at 7:39 PM 6 comments: