I've been tagged by Simran of ChipsnChutzpah and SimzCorner to write about Why I Read... :)

Should be one of the easiest things to write about, as I read a LOT.. but she's put across so many good points already that it's difficult to really come up with something different!! So I'm taking a slightly different route - it set me thinking of how my reading habit started.. and of course how it persisted .. so here goes!

My earliest memories of reading - Dad and I walking in Connaught Place in Delhi, and me pestering him to buy me a Tinkle or Amar Chitra Katha - that's really the first book I can remember reading so I've always had a soft corner for them. Though mom and dad did not have a vast reading habit - except for the tamil publications that of course used to be subscribed to religiously, they were really instrumental in building it up in me. Whether it was these early memories of Delhi, or of them not minding me spending my pocket money (Rs. 10 was a princely amount in those days) on library books when I was older (and they never looked over my shoulder to see what I read!), they definitely nudged me along this path. So the first reason I read is because of them!

My next memory is of my teenage years. I was always accused of reading novels more than my school books, and was lucky enough to pass by decently enough in school to not get into major trouble about that! Someone or the other was always telling me not to read in poor light or not to read in this position/that position - "Or your eyes will go bad"!! Well my persisting to do just the above, literally all through my school years, is proof positive that that is not the case (and genetics too was on my side!). So my next reason was probably to show all those people "I will read what and how I want to!". Which of course does not stop me telling my daughter "not to lie down and read!", and laugh to myself while doing so :).

As my working/earning life began, I had this thirst to own books and build up a collection.. I usually read only fiction and you'll find most available books by Agatha Christie and Isaac Asimov (my favourite authors of all time) in my house. When we built our house, we made sure we had space for books, and I was all set to fill it up. Even I didn't realize how many books I could end up with! So this was my "I am so thrilled I can own and re-read them as much as I want" stage :).

Soon I came to a stage where I literally do not have space for more books, and luckily enough this led to my Kindle (My Kindle Review). The multitude of books available for free, and most new books also coming out with a Kindle edition - the most space saving bookstore possible!! For the record, I do not miss the "look & feel" of holding a book at all.. maybe the smell of fresh paper occasionally, but that's about it :). It's tailor-made for me - no trouble with holding open bulky books with one hand while I eat with the other (I read a lot at the dining table!), no searching around for bookmarks or trying to remember the page where I left (I hate folding paper - who doesn't?), and the e-ink is nearly the same as looking at the page of a book!! My newest reason - just the wealth of books available to me through the Kindle has made me even more of a voracious reader !

Let me also add the actual reasons as to why I fell in love with reading. It gives me a special space - me and my book - it used to be that noone could come between us - people could have roaring arguments around me and I wouldn't know. Now of course that's no longer true - a certain loud call of "Amma!" has crept in there though I try to set boundaries. And it creates a special world away from my own mundane one - probably why I read only fiction :). And my latest genre of Fantasy (think Harry Potter, but in so many variations it would make your head spin!) is giving me some authors to supplant my lifetime favourite ones :).

Wow Simran, I did not realize that was going to such a long one. Thanks for the tag - it was quite an exploration for me :). I would like to tag:
Aparna
Forever Mother
Spicy Sweet
Rohini
Life_Refactored
Not sure if all of you read, but I'm sure I've seen the odd mention of books/book reviews on most of your blogs :).

Me(wondering where it's leading to): No baby, there is nothing like ghosts - people just scare you about it simply!

In a yellow teacup :) 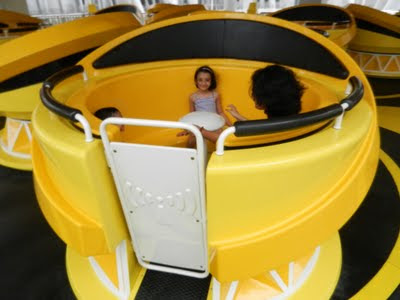 Posted for Thursday Challenge. The theme is "YELLOW"
Posted by Aparna at 7:25 AM 5 comments:

Learning to be Consistent :)

I keep reading whenever I look at parenting gyaan all over the place that we need to be "consistent" - in our dealings with the children ( something that hubby also used to keep telling me when i never used to enforce any of my scary consequences :) ). Of course that meant that I now try not to hold anything over the kids' heads and try to be consistent in what I say or do .. but who knew I would get a lesson from the youngest member of my family!

A few days back, at dinnertime, S had left some pasta on his plate and told me (I was sitting a few feet away) that he had finished and went and washed hands etc, and was going about his activities. After a few minutes when I went to clear the plate, I was very upset, scolded him, and told him to finish the food.

This morning, I had given him upma which I usually make into small balls so he eats it himself. Had a bit of a doubt if I'd given him too large a portion, then decided it's ok and waited to see if he would eat it. It was nearly time to leave for school, and I found 5 balls of upma still left behind. S's stomach looking quite full, and he gave a little burp, so I thought he'd had enough and said
"It's ok darlin' - let's get ready and go to school."
And he says:
"But that day when I left the pasta, you were angry with me!!"

That should surely teach me to be consistent and definitely to more careful with my portions LOL !!!!
Posted by Aparna at 9:58 AM 4 comments:

So now I had the butter, paneer, cream cheese ready, and I was all set to go.

The recipe called for a flour base, but that needed almond-meal that I was lazy to make, so I compromised and made a base from Digestive biscuits and butter (the easiest way ;)). I used about 90g of butter for 12 digestive biscuits, and this seemed to make the appropriate thickness in a 19cm pan (I measured it as the original recipe was for a 20cm springform pan).

In case of a flour base, it needs to be baked in a pre-heated oven at 150 degrees C for 15 mins. The biscuit base can apparently just be chilled (not baked), but I figured this out only later, so I baked that one anyway for about 10-12 mins till it browned up nicely.

Put all the above in a mixie/food processor and it makes a liquidy mixture. Don't mix too long, just enough make it even else it adds too many bubbles. Pour onto base, and bake for 1 hour at the same temperature. Leave in the oven after turning off for 1 more hour. Then into the fridge for 6 hours and you're all set (literally :)). 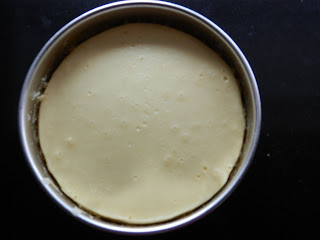 Ideally you can use a springform pan, so that the sides can be taken off and you can cut beautiful pieces immediately. I didn't have one, and didn't want to buy one just for this, so used a regular pan. Did not try to heroically invert and take out, instead cut out the first piece which obviously doesn't come out looking great, and then you have enough moving space to cut out neat pieces for the rest. After cutting 3-4 pieces, the remaining big chunk came out easily for storing in a different container. 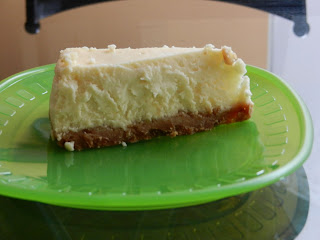 I had quite a big setback with a power cut of half an hour after it had been in the oven for 20 mins! Surprizingly and unlike how a usual cake would be ruined, this one's reasonably forgiving, and I still got something that looks and tastes pretty good :).
Posted by Aparna at 12:53 AM 11 comments:

An attempt at cheesecake - Part 1

Cheesecake is one of my favourite desserts - sweet but not overwhelmingly sweet, and rich of course :). I love trying out new baking recipes - not very often, just enough times to keep it interesting! My best result so far has been chocolate brownies - it's quite a family favourite. The apple pie was also quite decent the second time I tried it, but that one's a bit too much work so I don't like to make it too often.

I like making/churning butter at home, from the cream taken out from our milk (in an attempt to make the milk or curd a bit more fat-free :)). I usually make ghee out of it (don't tell me about the irony of that - I love my "ney"!). 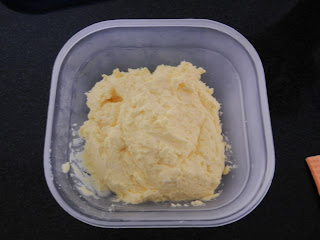 So this time I decided I am going to try a paneer cheesecake and use the butter for that, and also try to make paneer myself for the very first time. Very surprized by the ease of making paneer, and thrilled with the result. I am planning to try a combination of cream cheese and paneer - saw a cream cheese/ricotta combination - but that was really exorbitant to buy so I am changing it around a bit - let's see how that works. 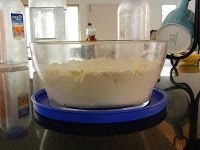 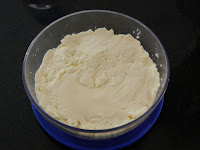 Part 2 with the actual cheesecake coming soon!
Posted by Aparna at 1:49 AM 3 comments: