I bought these very interesting socks for D which have pictures of animals like a cow or a pig at the heel.. but she's not very convinced about their cuteness as she feels they are a bit big for her - she's one of those children who feel every seam in the sock and can't bear it if her "little toe doesn't feel right!" :). Took a photo to prove to her how they look: 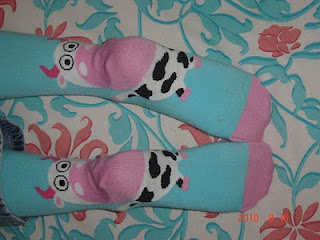 Goes to show how different children's perceptions can be from ours ! The simplest thing like giving her a new soap since her old one was nearly over sends her into raptures and she showers me with thank yous!! But something that was "Oh so cute!" to my mind hardly had an impact :).
Posted by Aparna at 6:27 AM 2 comments:

A weekend of festivals and performances...

Thursday was festival celebration at D & S 's school - they celebrated Varamahalakshmi puja and Onam at one go as they had holidays on Friday and Monday. Both of them went to school in traditional clothing. They had asked for the children to bring flowers in specific flowers which left me wondering why I needed to run around for orange marigolds and purple asters, but then they made the most beautiful rangolis with them :). 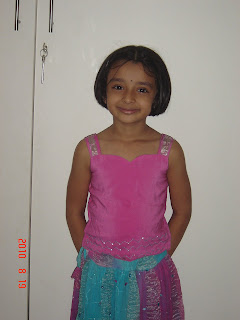 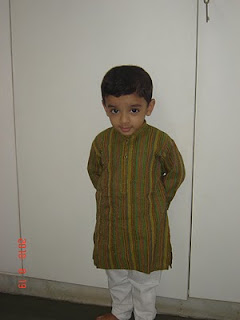 D & S took part in the Glorious Festival of Harmony at Ambedkar Bhawan on Sunday. They sang (or stood in S's case :) ) in the St. Mark's Children's Choir. S's first stage performance and he did quite a good job of standing more or less still - he was the youngest member at not yet 2.5! D is a veteran from her school performances and she had practised the songs so she enjoyed herself and was quite a vocal part of the choir. 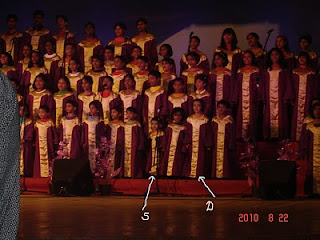 Trying to get S to sleep for his nap. It's much past his usual naptime and I'm trying the usual reasons:
Me: "Sleep fast baby. அப்பதான் பார்க் போலாம். (Only then we can go to the park)".
S: His usual sing songs of "Mann ka radio. Bajne de zara" "Tsamina mina eh eh" and then when I started looking annoyed "I lie you" - this repeated in various tones - very plaintively.
For a while trying to figure this out and asking "என்னடா? புரியலே?" (What is it, I don't understand) and in my mind going through all the things I say to him which he of course picks up and repeats at appropriate times I realize my son is saying "I love you!". He's delighted of course that I have given up on putting him to sleep and am giggling uncontrollably and keeps on with "Because i lie you Amma!"
Posted by Aparna at 4:00 AM 4 comments:

The Theme is Rainbows....

We had to convince her that we have quite enough rainbows and the fridge looks beautiful enough for now.. so here's until the next theme strikes. 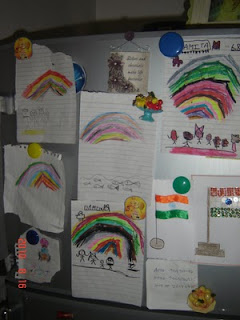 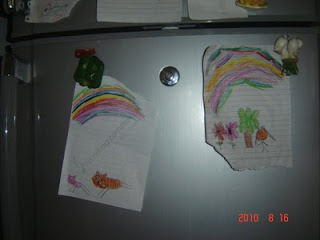 P.S: The couple of National Flags forming part of the collage are ones made by S and D at school for Independence Day celebrations(of course that means D made hers and S got one made by his teacher :) ).
Posted by Aparna at 3:42 AM 2 comments:

Passport for minor - quite a Major affair?

Beware - looong one - read only if you are atleast faintly interested in passport application procedures!

Had been wanting to get a passport for S for quite a while now - just been lazy in the last few weeks and didn't get around to it. Finally last week I swung into action. I thought I had done my research well on the internet - lots of information all over the place on sites like http://passport.gov.in/ and http://rpobangalore.gov.in/

When I did this 4 years back for D it was a reasonably simple procedure - I took an online appointment at the Regional Passport Office which I got with about a week or 10 days delay and only had to work out the documents and so on, and the deed was done. This time I had already found to my surprize that they no longer have appointments at the RPO (that was the excuse for my laziness to find out alternatives!). Next option - there's something called a Passport Seva Kendra where you could get an appointment and go and submit your form. Appointments seemed to be filled up atleast for the next month and more! (Didn't bother to look further than that as it didn't make sense to wait longer than that to submit a form I thought !!@@#!*)

Final option - I could submit the form at a Customer Service Centre like BangaloreOne which I felt was a good option and I was ok with there being a few days of delay for the form to get to the RPO from them since hopefully a minor passport should be issued without much fuss - police verification is not needed if both parents passport numbers are on the form. Downloaded and filled form, then got S's thumbprint in multiple places (This was the part I hated most, since the stamppad leaves a purple stain which has to be scrubbed out :( - was just thankful he doesn't put his finger/thumb in his mouth any more!)

So after much ado, went to BangaloreOne at Jayanagar prepared for some small hiccups like I had not got some document copy and so on... to be told that the downloaded forms are not accepted any more !!( I would call myself internet savvy but there was no place this was obvious on any of the passport related sites that they give you a form for download but they don't accept it anymore !!!!) Even better, they didn't have forms "available" and I would have to go to the PSK anyway to get them. Did that, obviously fuming at this point and came back home.

Checked all the sites again, got more info in obscure places now that I knew what to look for - for e.g. - Copies of documents submitted have to be notarized if submitting at BangaloreOne which is not needed at PSK, RPO (Just self attestation is enough for those). Filled the new form, got thumbprints again (Sigh!) and went to BangaloreOne again. This time - completely my mistake - had made mistakes filling the form (obviously shouldn't do these things when you are in a bad mood :(). Also didn't realize I would have to take S along ! (This wasn't the case when I did it for D - I took her thumbprint and just took the forms on my own to the RPO.)

So here's my summary of learnings from the last couple of weeks:

Thanks for reading this far :). Was good for me to vent and hope it helps some other parent sometime.
Posted by Aparna at 10:32 AM 4 comments:

S is finally out of his night diapers :). He has been having dry diapers for a long time now, but all the horror stories I have heard of boys and bedwetting had stopped me from leaving them out. I finally decided it's about time to see how he handles it and Yippeee.. no incidents as of the first night atleast !! Hope the trend continues and I can keep the remaining diapers just for emergencies and travel situations. I know that may be a bit too much to ask for but one can dream can't one ?

D was very early at getting toilet trained but took a while to stop with the night diapers. And then there came one fine day when she woke me up in the early hours of the morning to take her to the toilet instead of just wetting the bed - I am so not a morning person but my euphoria totally overcame my sleepiness :) !!
Posted by Aparna at 2:15 AM 2 comments:

I was reading an article in the newspaper a couple of days back that set me thinking - according to the census stay-at-home moms or housewives come under a generic "unproductive" category. My first reaction was "What!? Me unproductive?! - do the people who came up with the categories have moms/wives - wonder what those ladies feel about this labelling.. and so on and so forth...

Then after some cooling down time.. I realized that when financial output or contribution is the easiest way to categorize, there is no choice but to include people like me in such a category. The article by Santosh Desai was about how he felt it was unfair for moms/housewives to share the same category as prostitutes and beggars, but honestly - I didn't feel any indignity in that. After all it seems like we all come under the same umbrella of not making a "viable" contribution to society!
Posted by Aparna at 10:23 AM 2 comments:

On Tamil and Spiders and ...

S still talks a lot in Tamil which I hope will continue even after a few more weeks/months of school. D used to speak in the most wonderful மழலைதமிழ்(Tamil in babytalk) but after going to to school for a few months nothing but English would come out of her ! So much so that when she was around 4 years she used to tell people "I don't know tamil!". She is now learning Hindi and Kannada in addition to English - can't imagine my baby learning 3 languages - Now we insist on speaking in Tamil to her a lot, so her mother tongue doesn't get missed out among the rest:).

K, my cousin's son who is a day younger to D had come home the other day. Seeing his shoes which were clogs with a spiderman motif:
I tell S: What nice Spiderman shoes! Unakku Vaangalama? (Shall we buy for you?)
S: Enakku Irukkey (I already have!) - his clogs were also the same orange colour.
Me: Very happy that son is not yet at stage of asking for things, and infact refusing things "Very good Shehan!

A few moments pause while he digests this and we are also walking down the stairs outside our house. Then he says (pointing to a corner near the stairs):
S: Annikku spiderman paathome!
Realized that I had shown him a spider over there the other day - LOL Children and their amazing connections !!!
Posted by Aparna at 1:43 AM No comments: