Day 10 of the Marathon, and I'm starting to grasp at straws a bit, in between trying to get some other work done, and still find something interesting to write here - I remembered the challah I had posted on FB and had promised to put up the recipe of :). So here it is!

This one is from a Breadworks workshop that was arranged for us (for free!), us being a group of us from the Foodies in Bangalore group on FB who were the first to apply (Fastest Fingers First type of arrangement) for it. Much thanks to Chef Maurice Chaplais who was very patient with all our first-timer queries and to Mr. Cherian Philip for the kind initiative.

The recipe is for 6 pieces, so you have to edit according to the space of your oven, didn't want to do too many divisions and confuse everything, so writing it here as is:

1485g White flour
250g Butter
85g Milk powder
28g Salt
28g Improver (this is something we used at the workshop but I made at home without it and there was no problem)
85g Dark sugar
6 eggs plus 6 yolks
590g Water
28g Fresh yeast (I used instant yeast, found the conversions online)

Did I mention you need a digital weighing scale for this one ;) ?

1. Mix all to window, make into ball and bulk 1 hour - that was the original recipe. Just wanted to add that the dough will seem absolutely squishy squashy and scary, but you need to just use those scrapers and your kitchen slab as your workspace and go ahead and knead. The technique was a sort of pull and fold, that I can't explain further, probably you can check out some videos online. The "window" refers to when the dough when pulled into a thin film will look like a translucent window!

2. Fold and leave 40-45'' - This is after the first proofing, when you pick up the dough, slightly stretch it into a rectangular shape. Then fold over from one edge, and then the other to make a square. Cover and leave again for a second rise.

4. Divide each piece into 3 and roll into lengths thicker in the middle than on the edge, and braid - Not too difficult except for the stickiness of the dough, if you've ever plaited hair before ;).

5. Brush with egg wash on top and dip/sprinkle poppy/sesame seeds. Prove again for 30 minutes to 1 hour. Under prove rather than over prove.

And that's what mine looked like :). Didn't have sesame seeds handy and was too enthusiastic to wait until I bought them ;). Unfortunately did not take one after cutting, but the crust was lovely too. 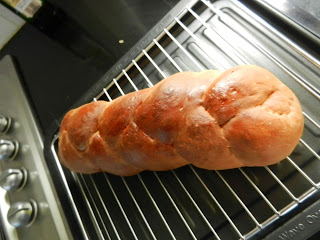