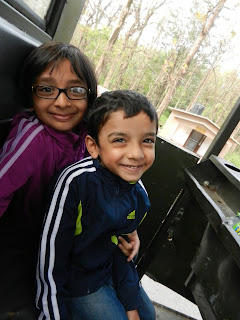 And now it was time for that Canter Safari that was in a large 16-18 seater open vehicle.. we started off with a bit of hesitation as we were in the last row, and the seats and the state of the vehicle in general did not inspire confidence. Unfortunately our fears were confirmed and the next 6 hours were the most uncomfortable I have spent in recent times. I don't have any diagnosed back problems but have neck issues due to spondylitis, and I can't imagine what someone with an acute problem would feel like. Noisy vehicle, somewhat noisy (though not bad) co-travelers made it nearly impossible to come close to any animal except maybe the deer who were used to it all.

I would definitely not recommend this for elderly travelers, there was a lady in the other vehicle who was finding it tough to even get in and off. Someone definitely needs to be held accountable for posting some health warnings here. It's just so easy to get away with stuff like this in India :(.

My back was feeling so stiff after this that I knew there was no way I could put up with a long drive to Binsar the next day(even in a comfortable Innova) if I didn't take some rest! So that's pretty much what we did :). All in all, with the absence of ever spotting any tigers or lions on all our holidays, and the discomfort caused by this one, we have decided that our next Jungle safari shall be a few years from now, and definitely in Africa ;).

While on the subject of the resort, I must mention that we have been blown away by the food in a couple of the Club Mahindra destinations, especially Coorg & Munnar. The Zest resort at Pondicherry also had an exceptional spread. At Corbett, our experience was that while the rates for the "Fun dining" that is offered only to members remains the same, the quality and spread of food definitely doesn't. Maybe the rates should also be based on what is actually available? Just a thought. On the positive side though, they do not charge for young children upto the age of 5, and though S has turned 5 and we told them that, they took one look at his size and courteously charged us only for D.
Posted by Aparna at 5:34 AM