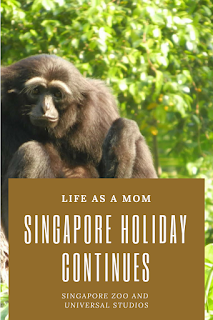 Just re-reading my previous blog post after writing most of this one - and realized it is really wordy. Apologies in advance for more of the same - I am meaning these posts to be a sort of diary to capture our holiday memories so it's difficult to limit :).

Day 4 started early with our visit to the Singapore Zoo. This is situated at quite a distance from the city, since they have tried to preserve a lot of the Rainforest like vegetation, and this is one place that is actually quite far from any Metro station, so we were really thankful to have a tour bus take us there without any hassles of figuring it our ourselves. This was one place where I was so happy with my choice of camera - the 18X zoom helped us take some wonderful close ups of the animals *clearing throat* - must share credit with hubby for some of the photos else would have shamelessly taken all of it ;). 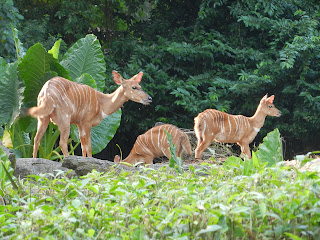 The weather in Singapore was quite hot and this was the day we felt it the most as we were outside the whole morning. My dear D was such a trooper throughout our trip and hardly complained about all the walking that we were doing, S was in his stroller most of the time but not really walking even in the short portions that we could not take the stroller in or something like that which was a bit of a problem, and that left us wondering if it would be  easier to do such a trip with a lighter infant than with trying to carry around a 3 year old! 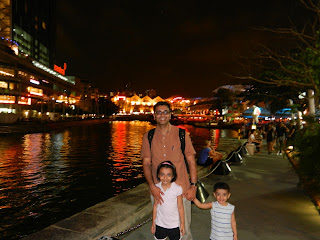 Day 4 afternoon was spent mostly in going around doing some shopping - we had some specific items in mind and even went to multiple places looking for one particular thing so were quite tired out by the time we reached the hotel in the evening. After an evening nap to recoup, we went out to one of the nightlife haunts - Clarke Quay - which was very close to our hotel. Had dinner at one of the restaurants close to the water and enjoyed the surroundings while keeping a comfortable distance from the actual nightlife happening around us :). 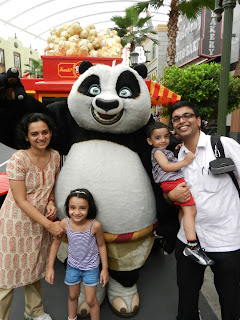 Day 5 was spent nearly completely at the Universal Studios which is also at Sentosa but easily an all dayer (heard that it's smaller than the one in LA). Different themes like Madagascar, Far far away, Sci-Fi city and so on - each with themed rides and even theme-based souvenir shops! Lots of characters like Shrek, Kung Fu Panda walking around and you can meet and take pictures with them. Also our first 4D movie experience with a short Shrek special movie - that includes effects like Donkey sneezing on the screen, and water spraying all over you, as well as spiders crawling up your legs when there are spiders on screen - which was my least favourite part. But once again, the children seemed to embrace the experience :). D had her first roller coaster experience - there was one where the min height was 122 cm so she and me went along - it was quite a scary ride, not at all a watered down version like I expected! Her immediate reaction was "I didn't like it!" - let's see if the experience grows on her :).

Day 6 which was our last day was spent mostly at our friends' home, with a visit to IKEA (which I have always been enamoured by and never seen before). Which of course meant we had to borrow a bag to complete our packing ;). The flight back was also predominantly spent seeing Toy Story and since it reached Bangalore on the same night, we didn't have much of a problem with jet lag the way back either.
Posted by Aparna at 9:34 AM