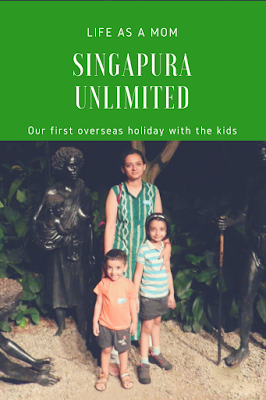 After much planning and consideration and waiting for our younger one to reach the "magic" age of 3, we finally made it to our first overseas vacation in the 2nd week of May.
We spent the first day with friends, which was a wonderful relaxing way to start off the holiday :). Surprizingly the children didn't seem to have a big problem with jet lag which was my main concern. Of course the effects of taking a 4 hr flight in the night and spending most of it watching Toy Story were there a little, but just catching up on some sleep during the day seemed to adjust our systems to the 2.5 hr time difference quite easily.
We also spent some part of Day 1 walking around the famous Orchard Road, which we realized is more of a "window" shopping destination for us than a place where we could actually buy something :). Felt relieved that I hadn't decided on the hotel just based on proximity to this famous road, as it was not the sort of place you would go everyday to shop, which was my impression of the place based on the travel agent's aahs and oohs.
Day 2 we checked into our hotel which was near Chinatown. In any case, Chinatown, Orchard Road, Little India are all within 5-10 minutes of each other (2-3 Metro stations), so staying near any of these is a good option. We got upgraded to a deluxe room which was a nice surprize - so even with the extra bed for D we had quite a lot of moving space which was nice. After this began our whirlwind sightseeing! 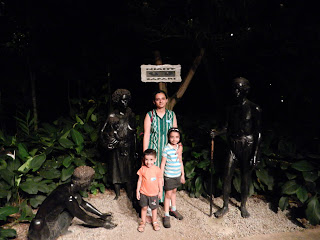 Our first stop was the Night Safari. The Singapore Zoo and Night Safari are actually different areas right next to each other i.e. the animals in the zoo and in the Night Safari are exclusive! They have a tram ride that takes you around the place, with animals in their areas in low lighting. No flash photography allowed,  which in a way really forces you to look at the animals. The children had great fun especially seeing all their favourites like elephants, giraffes and hippos. 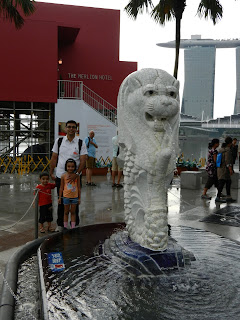 Day 3 morning we did a City Tour where we saw some highlights like the MerLion statue near the Marina, a Buddhist temple, the Orchid Gardens and Little India! Advantages and disadvantages of going on a guided organized tour - the time is always limited which for some places might feel like it's not enough. But in our case when traveling with children, we found that we wouldn't survive for too long a time at any one place anyway so the time restriction was to our favour :). It was also nice to have someone explaining about the places which in this case was a very enthusiastic lady tour conductor who succeeded in imparting a lot of the history and feel of the places we went to. The MerLion statue to me was a surprize as it looked so small compared to what I was expecting! 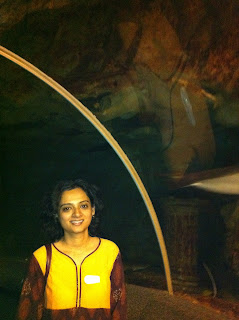 Realized later that the MerLion statue which appears the most in Singapore publicity is the one at Sentosa which is an island connected to Singapore by different means. This was our destination for the afternoon of Day 3. This is where the famous Underwater Aquarium is situated. I am a major reality television enthusiast so have seen this Aquarium in various shows like the Amazing Race and so on, and this was one place I was really looking forward to seeing :). It met all my expectations and the children also enjoyed it so much especially the Tunnel part of it, where we can walk through a glass tunnel and see the different fish swimming (it even looks like flying in the case of some large varieties of Ray!) 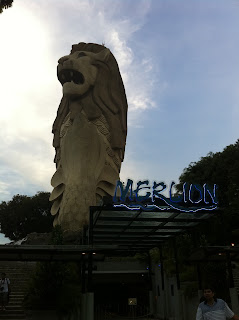 Sentosa also has a lot of other attractions like a 3D Cineblast experience - the type where your seats/cabins move along with the 3D movie - I spent a lot of time worriedly looking at the kids wondering if they were old enough for this but they were laughing through most of it. In any case most of these places have restrictions like the child has to be atleast 90 cm tall to go in - thankfully our S cleared this by about 2 cm - Phew! Another big highlight of the Sentosa experience is a program called "Songs of the Sea" which is usually the last in the itinerary for that day. They use all sorts of water and fire effects to portray a story about a sleeping princess who is awakened by a boy's singing. This is really absolutely spectacular - anybody who goes to Sentosa should not miss this amazing show!! Oh yes, and that's a photo of the larger MerLion :).

This post is getting even longer than I expected. Stopping here now, rest continued in Part 2 ! Spectacular photos coming up!
Posted by Aparna at 10:13 AM